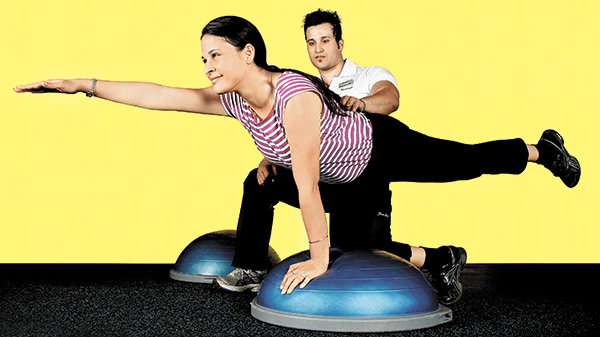 08 November, 2014
Print this article Font size -16+
At first sight, it didn’t appear threatening. Almost like a puffed up cushion. So far, so good, I thought to myself. It was a lazy Sunday morning and while most people were still planning their day, I was at FitnessFirst, a state-of-the-art gym that I visit every once in a while to check out the latest trends in fitness.
The puffed up cushion was actually the Bosu ball, short for Both Sides Utilised, a fitness training device to make an already tough day at the gym tougher. It’s amazing the consistency with which fitness enthusiasts in their zest to make the world a fitter place keep coming up with new tools! The Bosu ball was invented in 1999 by one such devotee — David Weck. It consists of an inflated rubber hemisphere attached to a rigid platform. It almost looks like a stability ball (another one of those devices) cut in half and gets its name from the fact that it can be positioned in two ways.
But the non-threatening, almost likeable appearance of the Bosu ball is meant to lull you into a false sense of comfort — as I found out soon enough. What it does actually is make exercise extra challenging. With a platform on one side and a rubber dome on the other, the tool adds instability to your workouts, forcing you to use your core to remain steady. Even a simple exercise like a lunge puts more pressure on your thighs and calves as you put one foot on the unstable rubber dome.
“Use the dome-side up for cardio, lower body strength or core moves,” says Prandeep Bordoloi, my extremely fit trainer as he jumps up and down on the Bosu ball, landing perfectly each time. I give it a shot. I jump and land on the squishy dome…well almost. My foot slips and I land on my backside on the polished wooden floor. Oh well, may be I ought to start with stepping up and down and start jumping only after I’ve got my balance right, I say wearily. “That’s where the Bosu ball is going to help you,” says Prandeep as he sees me rubbing my back gingerly. The Bosu ball helps improve your strength and balance which is important for preventing injuries, he explains.
The Bosu ball requires you to maintain your centre of gravity over a surface that is constantly changing. I find just standing on it a challenge as my body moves and shifts in and out of balance.

“To keep yourself in place you have to constantly engage the stabiliser muscles in your upper and lower body,” says Prandeep even as I perch perilously atop the dome. I realise that concentration helps. My body is more aligned and balanced if I concentrate hard. It’s a bit like holding a yoga pose, the minute you stop concentrating on your breathing, you lose control of the pose.
I’m still coming to terms with the squishy side, when Prandeep flips it over. “You can use the platform side for upper body exercises, like push-ups or more core moves, like planks,” he explains, again giving a perfect demonstration.
He makes me do the forearm plank which targets the core, glutes, shoulders and the lower body. I place the Bosu ball dome-side down and then hold it with both arms (shoulder-width apart), with my forearms and upper arms at 90 degrees. Then I slowly raise my hips so that my body is in a straight line from head to heel.
I’ve done the same exercise previously on a flat surface and have found it tough. But doing it while managing an unstable surface is more difficult and, therefore, more effective, he informs me.
Thirty minutes on the Bosu ball is equivalent to 45 minutes in the gym, doing a series of exercises such as walking on the treadmill, cycling and doing weights. That’s the other thing. Everybody is in a hurry nowadays so any device which helps you save time becomes popular.
A Bosu ball workout is good for the core, glutes, quadriceps, balance and strength, explains Prandeep. And to drive home his point, he asks me to do the Superman pose. I’m intrigued. Will I start flying like the Man of Steel, I joke. Unlikely, he says with a smile. But with regular exercise and holding on to the pose longer, I’ll become a whole lot fitter and stronger.
The Bosu ball is put dome-side up and I sit on it with my knees bent and hands on the sphere. Then I slowly lift my right arm and left leg straight (parallel to the ground) to do the Superman flying pose. Hold for 30-60 seconds and then switch to the other arm and leg. After three sets, I’m near collapse; thankfully, Prandeep calls it a day.
Is the Bosu ball worth it? I think so. Will I be using it regularly? I hope so, but going by my track record, it’s unlikely.