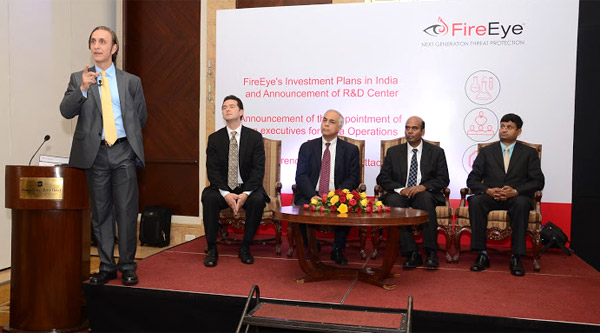 08 November, 2014
Print this article Font size -16+
Cyber security firm FireEye said on Thursday, 14 March, it will invest up to $50 million (about Rs 272 crore) in research and development (R&D) on Internet security products in the next 4-5 years.

The California-based firm launched its R&D centre in Bangalore which will develop and test new products. It will also hire 250 people in the next 5 years.

“We will invest $50 million in our R&D activities in India in the next 4-5 years to develop cutting-edge cyber security solutions,” FireEye Founder and Chief Technological Officer (CTO), Ashar Aziz said in New Delhi.

During its initial phase, the center will employ approximately 50 research and development specialistsand plans to recruit 250 employees in the next five years.

The company also announced Sridhar Jayanthi as Vice President of Research and Development and Managing Director, India Operations for the Bangalore center while naming Ramsunder Papineni as the Regional Sales Director, India and SAARC.

Ashar Aziz, founder and CTO, FireEye said: "The Bangalore office is an important milestone for FireEye's global expansion. We expect the new Bangalore office to play a key role in maintaining cutting-edge technology and innovation in the FireEye line of security products. We welcome Sridhar to the FireEye executive team. His extensive experience in building sophisticated product development teams in the US and India is an important addition."

Prior to FireEye, Sridhar was senior vice president of engineering and managing director, India of McAfee.

Cyber attacks have become much more sophisticated and are now easily bypassing traditional signature-based defenses, such as next-generation firewalls, IPS, anti-virus, and gateways, compromising the majority of enterprise networks.

The FireEye platform supplements these legacy defenses with a new model of security to protect against the new breed of cyber attacks.

The core of the FireEye platform is a signature-less, virtualised detection engine and a cloud-based threat intelligence network, which help organisations protect their assets across all major threat vectors, including Web, email, mobile, and file-based cyber attacks. The FireEye platform is deployed in over 40 countries and more than 1,000 customers and partners, including over 25 per cent of the Fortune 100.