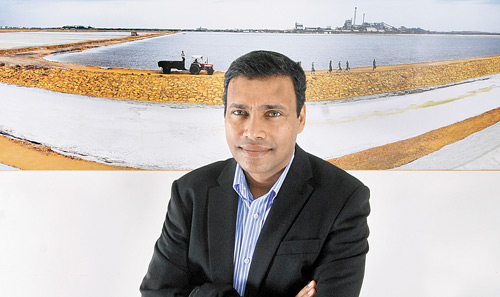 Soda ash, a key ingredient in glass, soaps, certain chemicals, pulp and paper, is the revenue mainstay for TCL. It contributed 38 per cent of revenues in 2010-11. TCL began soda ash production in 1944 at Mithapur, selling almost the entire production domestically. In December 2005, it bought 63.5 per cent shares for Rs 508 crore in UK-based Brunner Mond Group, which had manufacturing facilities in the UK, the Netherlands and Kenya. Three years later, it bought General Chemical Industrial Products, one of the largest soda ash producers in the US with 2.5 million tonne per annum (mtpa) of natural soda ash capacity. That took TCL's global capacity from around 3 million mtpa to over 5 million mtpa, and made TCL the second-largest soda ash producer in the world, behind Solvay, a Belgian firm, which has over 7.8 mtpa in capacity.

Mukundan says TCL will invest $100 million over three years in the US facility to expand capacity by another 400,000 tonne. The capacity in India will also increase by 100,000 tonne. The global soda ash market is about 63 million tonnes, growing at more than 5 per cent a year.

TCL's strategy to own the natural raw material source is paying off. "The cost of natural soda ash is $55-75 per tonne, where synthetic soda ash costs $180-200 per tonne. Our focus on natural soda ash mines has helped us become one of the low-cost producers," says Ghose. "TCL's plants are operating at 85 per cent utilisation and a healthy demand will make this go up to 90-95 per cent by FY13," says Manish Mahawar, an analyst with broking firm Prabhudas Lilladher. "But rising input costs continue to put pressure on soda ash business." TCL is also the world's fourth-largest player for sodium bicarbonate, commonly used as a drug ingredient, food additive and animal feed.

Plant Food
You might call it the fertilisers business, but TCL prefers to call it crop nutrition (in line with farm essentials). Urea and complex fertilisers account for 36 per cent of TCL's revenues, making it the second-largest business in the company. Most of the sales are in North India. "The government's decision last year to re-categorise fertiliser pricing under the nutrient-based subsidy (NBS) scheme (except for urea) will be good for manufacturers," says Ghose. "And there are plans to extend the NBS scheme to urea soon, too."

Securities analysts with B&K Securities concur. "TCL is set to benefit in the long run with the introduction of NBS in the urea sector, as it is one of the most efficient urea manufacturer in the country," note B&K's A. Rajkumar and G. Vijayaraghavan in their August 2011 report.

In fertilisers, strategic acquisitions play a part too. TCL bought 25 per cent of a urea fertiliser project in Gabon this April for $290 million. The NBS also allows TCL to experiment with customised fertilisers, establishing two plants at Rs 110 crore in West Bengal and Uttar Pradesh. A recent launch, Paras Farmoola, marks the firm's entry here.

But availability of gas has been a problem big enough for TCL to suspend plans of expanding urea capacity. But that has not stopped it from extending its portfolio; it owns 50 per cent of Rallis India, which makes farm inputs other than fertilisers — from seeds to agrochemicals.

Distribution is another strength. TCL operates retail outlets (it has 712 centres) under the Tata Kisan Sansar brand (Rallis has a similarly extensive chain). "Performance in the agriculture input business led by urea will be strong," notes Mahawar. But his report warns of input cost pressures and lower margins from non-urea businesses.

break-page-break
Speaking about non-urea businesses, TCL is test marketing its latest salt brand, Tata Salt Plus in Orissa, as a health enhancer. Developed in association with the National Institute for Nutrition, Hyderabad, the iron-fortified iodised salt claims to reduce chances of anaemia. "Given that every other child has iron deficiency, the product has huge potential," says Ashvini Hiran, COO, consumer products, TCL. "We hope to expand it in eastern India by March."

TCL brands enjoy huge brand equity and market share in the country. Tata Salt, i-Shakti and Tata Salt Lite account for 64 per cent of the branded salt market in India. Competitors — HUL (15.8), Nirma (13.3) and ITC (6.9) are way behind. That said, India's edible salt market is 5.5 million tonne annually, but branded salts account for just 1.3 million tonne. "Our products reach about 70 million houses every month through 1.6 million outlets. We plan to increase this to about 2 million outlets within the next 18 months," says Hiran. TCL will also increase capacity for salt from 600,000-800,000 tonnes.

False Starts
Its traditional businesses are doing well, but the new consumer businesses — food and water purifiers — are yet to create big ripples. TCL bets big on selling pulses grown with hybrid seeds and modern farming techniques. It launched four variants last year under i-Shakthi and aims to sell 300,000-400,000 tonne in a few years. This year, says Hiran, the target is 20,000 tonne. "India has an annual shortfall of about 4 million tonne pulses and we want to tap that," he says. But anti-hoarding laws of various states and fluctuating prices of pulses are affecting rapid roll out plans.

Facing similar challenges is Tata Swach, launched with almost the same hype as Tata's small car Nano. Rural buyers are not flocking to TCL's 8,000-plus outlets to buy the water purifier. Hiran disagrees. "We have sold over 400,000 units since launch (in January 2010)," he says. "Our target is to reach a million units by 2012." Now, TCL plans to sell a third, and the cheapest model, purifier for villages.

Khet-Se, a joint venture of TCL and Total Produce of Ireland, to sell fresh vegetables, has not gained enough momentum, despite being a few years old. Its total revenue last year was just Rs 9.5 crore, and it is yet to break even. "We were a bit too far ahead of the curve (in launching the JV)," says Mukundan. Still, he is betting big on the investments made in bio-technology. In 2008, TCL had bought 33.8 per cent of JOil, a jatropha seedling firm in Singapore. The firm has a bioethanol test plant at Nanded, Maharashtra, and plans a sugarcane-based bioethanol plant in Mozambique. Rallis India recently bought 60 per cent in Metahelix Life Sciences, a research-led seed firm.

For Mukundan and his cohort, it is all about how science can touch people's lives: combining chemistry with physics and biotechnology. That sounds inspired, but a little fanciful, too. TCL will have to first better the performance of its acquired subsidiaries and scale up its consumer products businesses. Otherwise, they could end up being too far ahead of the curve — again.