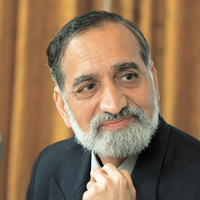 A frightful year of global economic disaster has just gone by, and the new one holds promise of better times. For the BPO industry — as for the economy — things were pretty bad in the US and European market, but India was in much better shape. This year poses a new set of challenges and worries, as also new growth opportunities. Looking ahead, one sees a few important trends and issues. Such as the 3Ss of future: scale, specialisation and synergy.

Scale is an obvious driver: it implies broad-spectrum capabilities, attracts big customers, and makes for cost-effectiveness. For start-ups and small companies, the way forward is specialisation. A niche player specialised in a particular segment, a boutique firm which specialises in one specific area or one particular process — I see a bright future for them.
The third ‘S’ is synergy. This could be achieved through consolidation, especially for mid-sized companies which do not have the scale or specialisation. For them, the future lies in building some kind of synergy. I see some consolidation happening in the industry, even if slowly. In fact, bigger players too will look for ever larger scale, and consolidation through acquisition or mergers might happen even between two substantial companies.
This is because companies that operate on a scale model have to remain at the top echelons of the size ranking. If you are not in that league, then the scale game begins to work against you. If you are the tenth or 11th biggest company, then you do not have the scale to be really big: nor are you very specialised because you are spread across a lot of areas. So, the challenge is to grow organically at super speed or merge or consolidate to be in the top league. Scale is relative, so unless you are somewhere among the biggies, that is going to be a challenge.
There is an emerging trend that is beyond all these. A possibility with huge potential: a transformation or a movement up from traditional BPO to what one may call BFO (business function outsourcing). In this, not only are processes, but also complete functions are outsourced. This began a few years back when companies started outsourcing large parts of F&A (finance and accounting) and HR. In future, many enterprises would focus only on their core business. A research and development firm, for example, may choose to outsource its marketing function.
The companies that would find BFO most attractive are mid-sized companies, which exist in  large numbers in Europe and the US. Thus, one has to look beyond the Fortune 500 companies to the thousands of SMEs. If BPOs can transform themselves and develop expertise in specific areas, they can get big business.
The other need is to combine NEW with the OLD model. NEW stands for nationally efficient work. So far, we have had great success with the quicker-better-cheaper model. If India just had one of the above, there would have been competition from many others. We continue to dominate because we can deliver all three. But this combination shows signs of wearing off: in certain areas like voice (call centres) we are beginning to slowly lose out. A substantial part of incremental voice business is going to the Philippines. While China and other countries are yet many years behind, they are pushing things aggressively. To retain our comparative edge, we have to act quickly and effectively, particularly on the quality and quantity of talent.
Another vital factor in NEW is the taxation system and its operation. If two countries are equally attractive, the customer starts looking at other dimensions. If the regulatory policies, tax regulations and fiscal incentives in some places are better, then it tilts the balance completely. In the past few years, India is increasingly perceived as being less industry-friendly, with uncertainties in continuation of the software technology parks scheme, an overly aggressive tax administration and sometimes ambiguous tax laws. Meanwhile, others have emulated and bettered the incentives that India offered.
Apart from NEW, individual companies will have to adopt the OLD model: optimally located delivery. This may require delivery centres in various countries to meet specific client requirements or to tap into specialised talent pools — for example for language skills. It would also involve centres in Tier II and III towns in India, to seek additional talent, tap the growing domestic market and lower costs.
While the prospects for the Indian BPO industry look bright, there are challenges to overcome in order to tap the potential of this sector.
As told to Sunny Sen
The author is former president of Nasscom
(This story was published in Businessworld Issue Dated 25-01-2010)
Tags assigned to this article:
magazine it bpo nasscom sunny sen kiran karnik tech wars