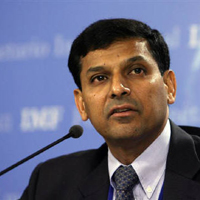 08 November, 2014
Print this article Font size -16+
The US Federal Reserve's latest round of monetary stimulus and monetary easing by the European Central Bank will benefit India in the short term, chief economic adviser, Raghuram Rajan, said on September 25.

The Fed began buying $40 billion a month in mortgage-backed securities this month and has pledged to continue the purchases until the labour market has improved substantially. The programme is called QE3 because it is the Fed's third try at quantitative easing, or buying bonds to stimulate the economy.

Rajan emphasised the need the reduce fiscal gap by cutting on subsidies. "Economic gloom is not restricted to India," he added.

Finance minister P Chidambaram has got down to the business of keeping the fiscal slippage to the minimum after admitting that meeting 5.1 per cent target for the year will be difficult.

The minister is personally looking at any expenditure above Rs 200 crore to ensure that there's no overspending by any ministry and has tasked the revenue department to look out for more funds to cushion the impact of higher subsidies.

Cautioning against over- dependence on FIIs, which brings in hot money, Rajan also said the government should focus on Foreign Direct Investment (FDI) and open more sectors to such inflows.

"We have to be careful that we are not overtly dependent on external investors that this is an environment when the external investor is quite fickle...," Rajan said in his first media interaction.

Betting high on India's reform initiatives, foreign investors have pumped in more than Rs 9,000 crore (about $1.67 billion) in the country's equity market this month.

"The safest form of financing is through FDI, without any doubt because its long term... If you can make more financing through FDI, you are safer and so to the extent we can open up more to FDI... There will be efficiency, because there will be more competition in local economy," Rajan said.

In the last couple of days, the government has taken a number of reform initiatives, like opening the multi-brand retail chain to FDI, hiking diesel prices by over Rs 5 a litre, capping the number of subsidised LPG cylinders to six per family a year, allowing foreign carriers to pick up stake in domestic airlines and liberalising FDI rules for broadcasting sector.

Besides, talks are on to increase the FDI cap in insurance sector to 49 per cent, from the existing 26 per cent.

"More FDI is good thing at this point, not in every sector but in many sectors ... So in general there is scope for more FDI in many sector, like insurance," he added.

Rajan also underlined the need for aligning domestic petroleum prices with international rates with a view to reducing subsidies and containing fiscal deficit.

The borrowing calendar, to be announced on September 27, is not likely to suggest any extra borrowing which will send out a clear signal that the government is serious about fiscal consolidation.

The government will likely borrow an additional Rs 50,000 crore ($9.34 billion) for the year ending in March and miss its fiscal deficit target, a Reuters poll showed, raising doubt about the fiscal discipline of a country whose credit ratings are under threat.

The country's fiscal deficit is expected to rise to 5.8 per cent of gross domestic product (GDP), higher than the government's target of 5.1 per cent of GDP given in March, according to the poll of 24 economists taken over the past week.

Estimates for the government's additional borrowing for the second half of the fiscal year which started in April ranged between Rs 15,000 crore to Rs 75,000 crore.

Although major reforms this month, including a hike in subsidised diesel prices, have been cheered by markets, investors remain worried about fiscal discipline.

The government had earlier set its borrowing target for October-March at Rs 2 trillion, as part of its plans to raise Rs 5.7 trillion for the full fiscal year.

However, four months into the year, the deficit has already hit 51.5 per cent of the full year target, making it likely the government will have to resort to more borrowing.

India's GDP forecast has been cut by 1% to 5.5% by Standard & Poor's Ratings as the entire Asia Pacific feels the pressure of ongoing economic uncertainty.

"Although Asia Pacific has recorded strong GDP growth relative to other global economies, we have observed a continued change in the region's economic barometer," said S&P ratings in a statement on Monday.