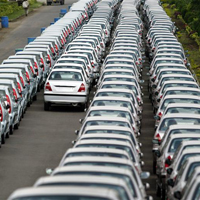 08 November, 2014
Print this article Font size -16+
Car sales in India slumped 25.7 per cent in February, the biggest fall in more than 12 years and the fourth consecutive monthly slide, an industry body said on Monday, as sluggish economic growth continues to weigh on demand.

The industry is expected to see it first decline in annual sales in a decade as high interest rates and rising fuel costs in Asia's third-largest economy put off buyers in a market that was once one of the world's most promising.

Automakers sold 158,513 cars in India last month, data from the Society of Indian Automobile Manufacturers (SIAM) showed. Car sales are down 4.6 percent for the first 11 months of the fiscal year ending in March, it said.

"There is no improvement in the market sentiment. People have more or less stopped discretionary purchases," Sugato Sen, deputy director general of SIAM told Reuters.

"This has really impacted the bottom of the pyramid, people who buy the smaller cars," he said, referring to the slowing economy that is expected to grow 5 per cent, a decade low. "That is getting reflected in the numbers."

SIAM last month cut its car sales growth forecast for the year that ends on March 31 to 0-1 per cent, its third downgrade this financial year from an initial estimate of 10-12 per cent.

Sen, however, said that car sales in March were unlikely to reverse the falling trend for this fiscal year and annual sales were expected to end up in the "negative territory" for the first time since the 2002-03 fiscal year.

The demand for cars is likely to be hit in the near term by a surprise hike in taxes on sports utility vehicles (SUVs) in the last month's budget for the coming fiscal year. The demand for SUVs had provided some cheer for the automakers.

Over the past few years, billions of dollars of investment has poured into the industry from the world's biggest car makers including Ford, General Motors, and Nissan, hungry for growth outside their core markets.

Sales grew a record 30 percent in the year to March 2011 and annual sales have grown every year since the financial year that ended in March 2003, according to data from SIAM.

But a series of interest rate increases by the inflation-wary Reserve Bank of India, combined with a slowdown in India's once-breakneck GDP growth, saw sales growth fall to just 2.2 per cent last year.

Sales of motorcycles fell 4.5 per cent in February to 800,185 vehicles, SIAM said on Monday. Truck and bus sales, a key barometer for the health of the domestic economy, were down 11.1 per cent at 68,388, the industry body said.

The automobile sector index was down 0.1 per cent at around noon on Monday, while the broader Mumbai market index was little changed from its previous close.