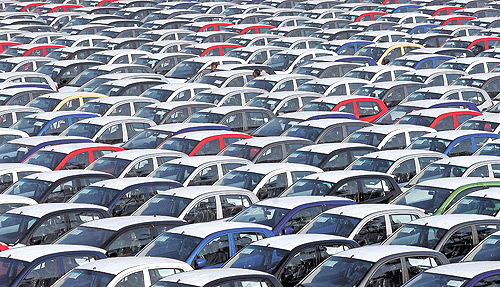 Chennai Rules
The Indian automobile industry delivers revenues of $35 billion, according to KPMG. And this massive investment is primarily concentrated in three cities of Delhi/NCR, Pune and Chennai. Last year, the southern region emerged as the leading automobile cluster in the country (accounting for 35 per cent of the revenue), surpassing western (33 per cent) and northern (32 per cent) region. "Of the three main manufacturing hubs, Chennai's automobile industry has evolved from a low-key supplier to the domestic market to becoming one of the key auto-parts centres in Asia," says Yezdi Nagporewalla, executive director at KPMG in Mumbai.

"Look at the growth of the city, the number of apartments and retail complexes are testimony to how a community cluster develops because of the automobile industry," says Srivats Ram, managing director of Wheels India, a tier-1 vendor of the TVS Group, 40 per cent of whose component business comes from Chennai alone.

With players such as Ford, Hyundai, BMW, Renault-Nissan and Mitsubishi situating their base in the region, Chennai is fast emerging as one of the top 10 global auto manufacturing centres with an expected installed production capacity of 1.28 million cars and 350,000 commercial vehicles and buses by end-2011.

Ford, which was the first to establish a car plant in Chennai in 1995, recently set up a 250,000-unit engine facility to meet its domestic and export demands. "Our exports are looking positive with Figo slated to roll out in 50 new markets from Chennai," says Michael Boneham, president and managing director of Ford India. Ford is also looking at increasing localisation; the number of suppliers has already increased from 150 to 180. "Our suppliers will need to play a key role as we gradually localise our vehicles in Chennai to extend better value to our customer base in India," says Boneham.

break-page-break
What makes Chennai so attractive? "It is the incentives offered by the Tamil Nadu government coupled with an established auto ancillary hub, availability of skilled manpower and immediate access to a port that continues to attract investment to the region," says Kapil Arora, head of automotive practice at Ernst & Young.

While Chennai has had an ecosystem of component makers since the 1950s, thanks to Ashok Leyland and TVS Motors, the city's booming auto sector is giving rise to several new entrepreneurs, such as D. Subramanian, who left a cushy job in Pune 15 years ago to start an automobile press shop in Chennai with a capital of less than Rs 50,000. With the growth of automobile giants Hyundai and Ford in Chennai, Subramanian's business, Chennai Servotronics, has prospered and grown to Rs 40-crore in sales. "Chennai's real growth has been because of the automobile industry," says Subramanian, whose company supplies machine components to Hyundai and General Motors (GM).

Pune is closing in on Chennai. The region had attracted $190 million of foreign direct investment in the automotive sector till January 2010. While Volkswagen has invested around Rs 4,800 crore, GM put in $500 million for its diesel plants. During 2006-08, the auto sector witnessed an investment of $2.7 billion. By 2015, $9 billion of investment is expected in Pune's auto sector alone.

The third major auto manufacturing cluster is the Gurgaon-Manesar belt in the NCR, where the presence of giants such as Maruti Suzuki, Hero Honda, Honda Motors and Escorts has led to the development of a large number of ancillary units — close to 1,000. Its other plus point is an automotive testing laboratory, run by the National Automotive Testing and Research and Development Infrastructure Project.

Chennai has left its peers far behind. And there are some costs attached. Poor traffic management, power shortages, infrastructure bottlenecks and talent scarcity are just some of the problems that the city is facing.

Problems Of Progress
The Oragadam automobile cluster, approximately 30 km from Chennai, is no haven. Four years ago, it was a bushy and barren outland. Today, it is bustling with activity but the infrastructure is unable to keep pace. Traffic jams are the norm, as vouched by Kanan. "The average commute for our employees is around 90 minutes in the morning," says Kim Song, managing director of Posco Steel, which is in the same cluster as the Renault Nissan Alliance.


M. Velmurugan, executive vice-chairman of the Guidance Bureau, the single-window clearing unit for industry in Chennai, hopes things will improve. "This year we will address many issues." About Rs 2,000 crore will be spent on creating an elevated expressway to the Chennai port and the narrow road to Oragadam will be converted into a 6-lane highway.

Power shortage is another drawback. Load shedding has become common in the city and average peak time shortage in Chennai is 1,600-3,400 MW. "The power problem is bad. Power shuts off for a minute and it takes us 15 minutes to restart the machines," says Ralph Ruthner, CEO of Rieter Nittoku, a tier-1 supplier of NVH mufflers to Renault-Nissan. Rieter has invested $20 million for a 220,000-unit capacity plant in the region recently.

Though Chennai has grown as an auto hub, it hasn't impressed all. Shinji Shiokawa, managing director of Unipress India, was taken aback when he first came to Chennai. "For an automotive hub, there should not be any delays. But here, it is difficult to maintain the just-in-time concept," he says. Lack of skilled manpower and organised work ethics make things worse. He adds that the city desperately needs vocational training schools since training labour from scratch is very difficult. Not just information technology, "we need skills to be developed in manufacturing", he says.

Talent shortage is faced by auto hubs across the country as the industry is not considered very lucrative for young engineers. "Getting talent is difficult, but there is enough evidence suggesting that engineers want to work for this industry now," says R.K. Behera, chairman of the Rs 700-crore RSB Transmission in Pune.

Although Chennai has catapulted itself as an important manufacturing hub in India, it lags behind its other Asian peers in terms of infrastructure, research and technological spend. To maintain its global competitiveness, the government has to continuously work on developing infrastructure. Only then will Chennai become the next Detroit — a real auto-city.