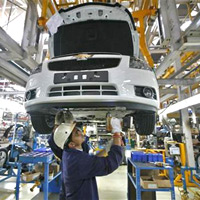 The data comes after industry-wide car sales declined for nine straight months to July and as some automakers move to curtail production and reduce labour costs.

Passenger vehicle sales at Maruti Suzuki India Ltd, the country's biggest carmaker by market share, doubled in August but that was mainly a reaction to a weak month last year when labour unrest resulted in a factory shutdown.

With a darkening economic picture forcing automakers to operate below capacity levels, Mahindra has let go about 1,000 temporary and contract workers over the past two months and said it would be observing up to six "no production" days per month at its automotive plants in the months ahead.

Maruti Suzuki is adjusting its number of temporary workers to reflect weak production but declined to give further details.

Big-ticket sales usually pick up in India in September, the beginning of the festive season which runs until the end of the year, and carmakers like Volkswagen AG and Nissan Motor have rushed to launch new or refreshed models.

But a plunging rupee is exacerbating problems in the industry. The rupee has tumbled nearly 17 percent since the beginning of the year and the fall in August was the biggest for any month on record.

With the industry heavily reliant on imported auto parts, some foreign automakers, such as General Motors Co and BMW, have moved to raise prices and more are expected to follow suit, providing new deterrents to spending.

"As of now they have resisted from increasing prices but probably they will have to increase the prices to mitigate the impact."

Some local auto executives have called for government action.

"Immediate action by the government is needed so as not to lose out on the upcoming festive season wherein sales could look up and bring some cheer for the auto industry," Pravin Shah, head of Mahindra's automotive division, said on Sunday.

India and Indonesia have been hit worst by capital outflows from emerging economies as markets price in a tapering of the U.S. Federal Reserve's bond-buying stimulus.

They are the only countries whose automobile sectors have witnessed a fall in share prices this year, according to Reuters StarMine data. The Indian auto sector is down 7.9 per cent for the year to date, compared to an average 20.7 percent climb for global auto stocks.