Factory Sector Expands At Slightly Faster Pace In May 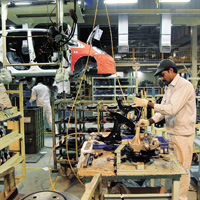 08 November, 2014
Print this article Font size -16+
Indian factory activity expanded at a slightly faster pace in May, while input prices rose at their slowest rate in over a year, a business survey showed on Monday.

The HSBC Manufacturing Purchasing Managers' Index (PMI), compiled by Markit, edged up to 51.4 in May from 51.3 in April.

Still, that was slightly below the 51.6 median forecast in a Reuters poll. A figure above 50 indicates monthly expansion.

The new orders sub-index, which includes domestic demand as well as orders from abroad, rose to 53.2 in May, a three-month high, from 52.5. A rise in the new orders index often is followed by better output in following months.

"The momentum in the manufacturing sector improved at the margin, thanks to higher domestic and export order flows," said Leif Eskesen, chief economist for India at HSBC.

Manufacturing output in India, which accounts for about 16 per cent of the overall economy, has been languishing of late. The PMI sub-index for output has fallen around 7 percentage points compared with two years ago.

A prolonged slowdown in output from mines, utilities and factories has severely hurt growth.

India's stock market is trading near a record high on expectations that a government led by newly-elected Prime Minister Narendra Modi, India's first majority government in three decades, will help bring the economy out of its torpor.

Some companies reported that India's elections, which took place over most of April through the first half of May, hindered output growth.

But the latest PMI data show that India, now growing below 5 percent on an annual basis, is still grappling with an inflation challenge.

Input prices, the cost of raw materials that factories buy, rose at their slowest pace in over a year.

The increase in prices factories charge for their goods accelerated in May, although Markit noted that a very small proportion of companies surveyed actually raised prices, mainly in consumer goods industries.

The Reserve Bank of India is expected to leave its benchmark interest rates on hold when it meets on June 3, according to a Reuters poll.