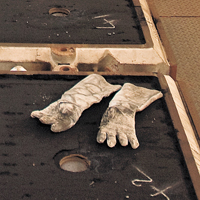 However, other data on Thursday is expected to show retail inflation remained elevated, giving little room for the Reserve Bank of India to support dwindling output.

Industrial production probably contracted 1.2 per cent annually in October, after rising 2.0 per cent in September, according to the median of 26 economists.

"The notable deceleration in the October core industries index, taken as an indication of the broader investment momentum, sets the stage for a weak IP (industrial production) outcome," said Radhika Rao, an economist at DBS in Singapore.

Production in the core industries - also known as infrastructure output and includes coal, electricity, cement, crude oil and steel factories - contracted in October year-on-year for the first time since February.

Output in those industries, which account for more than a third of overall factory production, fell 0.6 per cent annually that month versus 8.0 per cent growth in September, according to data last week.

Weak factory production will also be in line with the findings of an HSBC purchasing managers' index (PMI) which showed manufacturing activity contracted for the third straight month in October on dwindling demand.

However, the latest PMI reading showed factory activity returned to growth in November, suggesting a slow recovery in manufacturing may be under way.

"Overall the outlook (for industrial output) is for a modest recovery. I think we have seen the worst of it," said Vishnu Varathan, an economist at Mizuho Bank in Singapore.

Although the PMI survey pointed to some good news on inflation, the Reuters poll showed retail inflation is forecast to have remained at uncomfortable levels for policymakers in November due to stubbornly high food prices.

Annual consumer inflation is expected to just nudge lower to 10.00 per cent in November, from 10.09 per cent in October, according to the poll of 21 economists.

Food prices rose 12.56 per cent in October and analysts say prices of vegetables still remain high due to supply-chain problems - despite a good monsoon harvest.

An expansion in farm output and some infrastructure helped India's economy recover slightly in the July-September quarter, but growth still hovered close to decade lows, tempering hopes of a sustained rebound ahead of national elections due early next year.