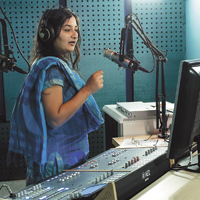 Come 28 July, the copyright board will once again tune into the frayed frequencies of the dispute between the FM radio industry and the music industry over royalty rates.

The copyright board is expected to review its 2002 order on royalty rates for commercial radio — Rs 660 per needle hour, which roughly translates into about 45 minutes of music per hour of broadcast. Going by the postures of the combatants, the fixed rate regime is likely to be replaced by one of revenue sharing. Still, the deliberations are unlikely to be either smooth or even civil.

The president of the Association of Radio Operators of India (AROI) and CEO Radio City, Apoorva Purohit, says with 15-20 per cent of revenues going towards royalty payments, most of the FM radio stations are losing money, particularly those in the smaller cities with less advertising revenue generation.

AROI has demanded that the government should put off the third round of FM radio frequency auction, which is part of the Information & Broadcasting Minister Ambika Soni's 100-day action plan, till the viability of radio stations is ensured through a more favourable music royalty regime.

"We want a revenue-sharing model with the music industry for royalty on the lines of our arrangement on licence fee with the government," says Purohit. AROI has proposed revenue share rate in the range of 0.25 per cent to 5 per cent for different radio stations based on their advertising revenue potential. "Globally, terrestrial radio stations pay zero to 2.5 per cent music royalty," she argues.

That stance angers the music industry. Vipul Pradhan, CEO of Phonographic Performance (PPL), the royalty collection agency of the music industry, argues that when the new media — satellite radio, internet radio, mobile radio, ring tones — pay about 30 per cent of revenues as royalty, there is no justification for charging low single-digit percentage royalty from commercial radio stations. "They should pay at least 20 per cent," he says.

Pradhan insists that the FM radio industry has got away with murder by exploiting a court ruling nearly a decade ago that allowed compulsory licensing of music by the public service broadcaster All India Radio.

"Just as in the case of cricket where the broadcast rights owner has to compulsorily provide content only to the public service broadcaster, Doordarshan, in the name of public interest — and not to the private sports channels — the music rights owners should be not be forced to compulsorily give out their content to commercial radio stations. The content owners should be able to license their content purely on commercial basis," he says.

It would be too much for the radio industry to expect not to pay any royalty as is the case in the US or 2.5 per cent of revenue as in some European countries. However, the recent settlement between the American music and new media radio industry could provide a suitable formula.