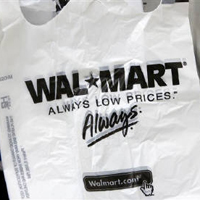 08 November, 2014
Print this article Font size -16+
The issue of FDI in retail came to haunt the government again in Parliament with a united Opposition demanding an inquiry and reply from Prime Minister Manmohan Singh on reports of Wal-Mart spending huge money to lobby for entry into the Indian market.
Forcing two adjournments in the Rajya Sabha before lunch, members from BJP, CPI-M, CPI, SP, JD-U, Trinamool Congress, AGP and AIADMK said the measure should be withdrawn as "corruption" has come to fore now because lobbying is illegal in India.
Raising the issue during Zero Hour, Ravishankar Prasad (BJP) said apprehensions were raised earlier also about Wal-Mart spending huge money to lobby for entering the Indian market, which has now been proved true.
"Wal-Mart has in its lobbying disclosure report to the US Senate said it has spent Rs 125 crore on lobbying and USD three million have been spent in 2012 itself for entering the Indian market.
"Lobbying is illegal in India. Lobbying is a kind of bribe. If Wal-Mart has said that hundreds of crores of rupees were spent in India, then it is a kind of bribe. Government should tell who was given this bribe. This raises a question mark on the implementation of FDI in retail," Prasad said.
He was supported by members from other opposition parties with TMC leader D Bandopadhyay waving a newspaper report and CPI-M member P Rajeeve asking for an "independent inquiry" into the whole episode alleging that there are some reports saying Wal-Mart invested money even before FEMA was amended.
"This is bribery," he said as the Opposition members shouted slogans in favour of withdrawing FDI.
(PTI)