FDI In Retail May Not Be Allowed, Hints Nirmala 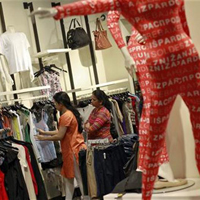 08 November, 2014
Print this article Font size -16+
The BJP-led government may not permit foreign retailers to open mega stores in the country as such a move may adversely impact small traders and farmers, new Commerce and Industry Minister Nirmala Sitharaman on Tuesday (27 May) indicated.
The 54-year old Minister said BJP has already clarified its position in the election manifesto on this politically sensitive issue.
"At this stage, the party position is very, very clear.
We have explained about FDI in multi-brand retail that it probably is not best opened up now, because medium and small sized traders or small farmers have not been adequately empowered... if you open up the floodgates of FDI in MBR, it may affect them," she told reporters after assuming charge of the ministry.
Sitharaman, the first ever woman Commerce Minister, was responding to a question whether the new government would rescind the current FDI policy of allowing foreign investment in multi-brand retail.
On her priorities, the Minister said she would sit with officials to understand what has happened all this while and further the manifesto based agenda of BJP.
Sitharaman, who was the National spokesperson for the BJP, is not a member of Parliament and would have to get elected to either the Rajya Sabha or the Lok Sabha within six months.
The BJP manifesto had said that "barring the multi-brand retail sector, FDI will be allowed in sectors wherever needed for job and asset creation, infrastructure and acquisition of niche technology and specialised expertise".
Although the previous government had allowed 51 per cent Foreign Direct Investment (FDI) in multi-brand retail, only one investment proposal of UK-based Tesco was cleared by the earlier government.
She said the ministry would look at the current FDI policy in a calibrated way. .
"We do not have a fixed approach. We would like to look at FDI in each sector in a very calibrated fashion," Sitharaman said.
Boosting exports and creation of jobs will be top priorities, she added.
The Ministry would play an important role in enhancing economic and trade ties with all the countries, she said.
India's exports in the last three years have been hovering around $300 billion. Exports in 2013-14 fell short of the $325 billion target but managed to reach $312.35 billion.
Exports stood at $300.4 billion in 2012-13 and $307 billion in 2011-12.
"The economic situation in this country demands that more jobs should be created for the young and talented and well educated... the ministry will bring in lot of hope to improve economic and commercial ties with our (trade) partners, improve on exports," she said.
Sitharaman said the Ministry is looking at various sectors where jobs can be created as the "Prime Minister has requested for appraisal status and situation which is prevailing to see where the immediate deliverable and doable areas, to be worked out".
The ministry will play an important role in strengthening relations with all the countries and "Pakistan is certainly one of them", she added.
When asked whether her plate is full as she is also the Minister of State for Finance and Corporate Affairs, she said: "If there is efficiency ... by bringing departments together, by bringing activities together that is beneficial for the country, it is not that plate is full or less. It is (about) more efficiency for the shake of delivery".
On a question about exports of minerals, she said the ministry would look at "greater details" as "every export is not bad".
She met Commerce and DIPP secretaries, who apprised her of their respective departments.
"There are lots of things happening in this department which should be taken forward with greater enthusiasm given the impetus with which Prime Minister Narendra Modi would like the department to function".
(Agencies)
Tags assigned to this article:
retail fdi in retail nirmala seetharaman