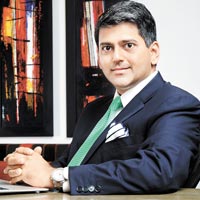 Both PE deals are a clear indication of the confidence that PE funds show in the future of luxury retail in India. This was L Capital's first ever investment in India. Says Kapoor: "The money will be used to promote domestic and international lifestyle brands into Genesis' existing portfolio." It is the first indication that  niche players in the luxury retail sector are attracting PE like never before. With credit getting tighter, companies prefer to go in for PE funding as it helps the brands leverage the funds' global portfolio. Genesis can also gain from LVMH group's expertise in inventory and working capital management.

There is no doubt that the market for luxury goods is growing in India. Says Neelesh Hundekari, principal and head — luxury and lifestyle practice at AT Kearney: "There is a definite interest by PE funds in the luxury space." He indicates that more transactions are anticipated in the not-too-distant future. "But most investors are looking for larger players which the industry does not have at the moment. However, the interest continues to be quite strong", he adds.

The funding is a follow up to the $640-million fund (Rs 2,560 crore) announced by L Capital Asia early this year. The fund is focused on investments in consumer brands, beauty and wellness, boutique hospitality, media and entertainment, private education across emerging economies of China, India and other South Asian countries.

Prior to this, PE funds had invested in Genesis Colors, also promoted by Kapoor. It raised Rs 80 crore from Henderson Equity Partners in 2009, while its other backers include Sequoia Capital India, Mayfield Fund and Silicon Valley Bank. Says V.T. Bharadwaj, managing director, Sequoia Capital: "There are not too many entrepreneur-backed luxury companies operating in India. Therefore, this deal is a good push for the industry at large, since there is a need to create robust businesses that can be scaled up."
break-page-break
The next couple of years should see more such PE deals in the luxury space. But what is abundantly clear is that the Indian luxury business is gathering enough steam to stand on its own. This, despite the fact that only a small proportion of the country population can truly afford luxury brands.

While PE funds have begun to invest in India's luxury business, China's luxury business has already moved up a couple of notches. Recently, Milan-based Prada was listed on the Hong Kong stock exchange. Prada has done in 2011 what France's L'Occitane did by listing in Hong Kong last year (see ‘The Shining Dragon').

So does this indicate that over the next few years, one can expect global luxury brands to list in India? As things stand, India is lagging in this regard. It is estimated that it will take at least seven to eight years before any of the global luxury brands reach that kind of scale in India. Only then would they look to list in the country. Says Navroz Mahudawala, managing director, Candle Partners: "Successful IPOs from luxury brands is still few years away. For a luxury IPO, which could get strong FII interest; we need to have at least $400-500 million valuation companies being listed and that looks unlikely for next four-to-five years."

The action has just begun. The momentum it gains will decide whether there is a business case for PE funding in India's growing luxury retail business.