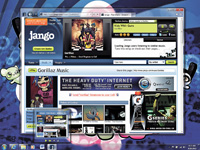 08 November, 2014
Print this article Font size -16+
"Unlocking the beauty of the web." That's Microsoft's new tag line for Internet Explorer 9 — the company's latest browser. Microsoft has taken into account all the shortcomings of the previous browsers, IE8, IE7, etc. and has improved upon them. The IE9's attractive and clean interface, robust features and great speed makes it perhaps the most sophisticated and intelligent browser of today.

So what is the inspiration behind the new IE9? "Previously, it was more about intimate communication. Now it is about the richer experience. The IE9 is like a human mind that helps in utilising parts of the PC and parts of the operating system," says Hemant Sachdev, managing director, consumer and online, at Microsoft India.

Speed was a major problem with the previous browsers from the Microsoft stable. The IE9 deals with that problem by using HTML5. Though it is not yet a standard, it helps in CPU/GPU acceleration. Instead of using 10 per cent of the capacity which is provided by the operating system, it uses the 90 per cent idle capacity of the computer, making it much faster. Since the IE9 is a beta version, it is not fair to compare it to the other browsers. However, even in the beta stage it seems to be faster than most browsers. This is primarily due to the hardware acceleration.

Another complaint with the old browsers was that the toolbars took up too much space, leaving less space for the content. The IE9 sports a new design, pretty similar to Google's Chrome. The tool bar has vanished and is embedded in three small buttons on the right hand top corner. The Run, Save, Cancel options pop up at the bottom of the page and are very subtle. Adding to the look are the Back and Forward buttons that are intuitive and take on the background colour of the webpage. When compared to Mozilla, the IE9 appears cleaner, especially during downloads as there are no sudden pop-ups. Instead, notifications and action buttons appear in a discreet bar along the bottom of the window, where you can address them at your convenience.

The tab management has certainly improved a lot from what it was in the IE8. One can rip a tab apart and make a separate page — again similar to what Chrome did sometime back. What is interesting is that one can make two webpages fit side by side and work on both of them simultaneously without bothering to minimise either page.

A unique attribute of the IE9 is the pinned shortcut feature (essentially a Windows 7 feature built into ie 9), which allows you to separate out your favourite sites and lock them right to the Windows Taskbar. So, now you can access your favourite websites directly without having to go through the process of opening a webpage. Also, according to the website owner's customisation, the key tabs of the website will drop on clicking right. And if you don't want it to be there, simply unpin the site.

While everything seems to be going well for IE9 — speed, user interface, ease of use and new improved features — the biggest problem is that the IE9 is not compatible with the Windows XP operating system and versions before that. It is, however, compatible with Vista. Still in its beta stage, IE 9 has only four Indian partners — NDTV, Zapak, Rediff and Indiatimes. Globally, it has 70 partners.

However, it's worth downloading the IE9 and exploring it on your own. It is different and perhaps the next step towards the evolution of Microsoft's browsers.

Note: All views are driven from personal usage of the browsers. Performances might change with alteration in hardware.