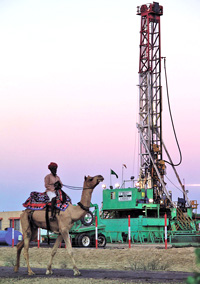 08 November, 2014
Print this article Font size -16+
The ninth edition of The New Exploration licensing Policy (Nelp) could throw up some surprises. On 15 October, 34 exploration blocks — these include eight deep-water blocks, seven shallow water blocks, and 19 onland blocks — across the country went under the hammer. The government of India rolled out a red carpet for companies to venture into Indian exploration and production programmes, which closes on 18 March 2011.

Meanwhile, there are proposals submitted by the Ministry of Petroleum and Natural Gas to the empowered committee of secretaries (ECS) for approval. It is expected that most of them would be accepted, aimed as making the ninth round of Nelp produce better results than the average response in the first seven. The eighth round was largely considered a failure because of the global recession. Just 76 bids were received for 36 blocks of the 70 on offer, compared to the 181 bids for 57 blocks received for Nelp VII.

Will global exploration and production companies bite this time? No one is certain; besides, the government's ambiguity over Vedanta's proposed takeover of Cairn India could be a dampener. Another dampener is the government's refusal to extend some tax benefits to operators (see ‘Mixed Offer'). Long before the scheduled ECS meeting, revenue secretary Sunil Mitra had told petroleum secretary S. Sundareshan that once the direct tax code came into force, all profit-linked tax deductions to industries, including the hydrocarbon sector, that were available under Section 80 IB (9) of Income Tax Act will be withdrawn.

Three are other disincentives too. For instance, the bond that bidders have to furnish for each block will be forfeited if the production-sharing contract for the block is not signed within 90 days of the award of the block. This clause is new. In addition, operators who do not drill wells down to their target depths would have to pay damages for the entire well, according to ministry officials. Nelp IX will be the last of its kind. It will be replaced by open acreage licensing policy, or OALP (see ‘Exploring New Rules', BW, 16 October 2010). Under OALP, companies can suggest any block for offer at any time, without waiting for the announcement of the bids as was the case under Nelp.

There is some good news too. Some regulations are being relexed to allow new companies an opportunity to explore smaller onshore blocks. Initial exploration periods are being extended to five years from four; companies could drill the committed amount of wells any time in that period. Now for the road show.