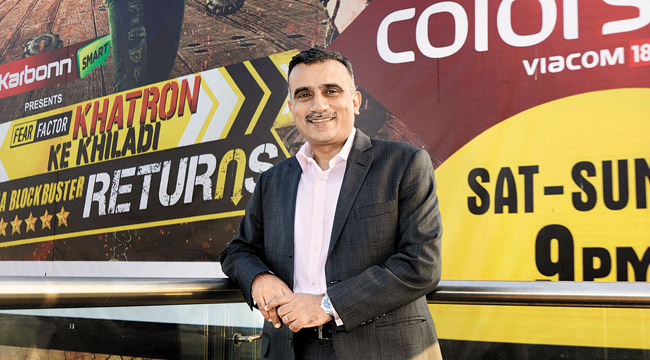 31 March, 2015
Print this article Font size -16+
A simultaneous process that will extend the Hindi general entertainment (GEC) TV brand Colors to the regional markets as well as bring a slew of ETV channels into the Network18 Group fold has begun. In a parallel move that will provide the financial backup for these expansion plans, the US-based behemoth Viacom Inc., Network18’s 50:50 joint venture partner in Viacom18, is buying a 50 per cent stake in Prism TV, the holding company of five ETV entertainment channels.
Talking about the consolidation and expansion plans of Viacom18 Media, Sudhanshu Vats, CEO of the company, says the Colors brand of the flagship Hindi entertainment channel of the group will, over the next few weeks, be extended to five ETV entertainment channels — Marathi, Gujarati, Kannada, Bangla and Oriya. The ETV tag on the channels will be replaced by the Colors logo and brand.
In 2011, Reliance Industries (RIL), in a multi-layered, complex financial operation, acquired several ETV news as well as entertainment channels from the original Hyderabad-based Eenadu Group promoter C. Ramoji Rao for Rs 2,600 crore. Later, in early 2012, Network18 bought out RIL’s ETV broadcasting assets ironically with funds loaned by RIL. In the final stage, Reliance announced plans to take over Network18 itself through a media trust.
The Rs 2,063-crore acquisition of ETV assets was completed as late as January 2014 by TV18 Broadcast, wherein the regional ETV news channels were grouped under a holding subsidiary, Panorama TV, while the five entertainment ETV channels were placed under Prism TV.

Light Touch
How did the change of ownership of Network18 from the original promoter Raghav Bahl to Reliance Industries impact Viacom18? “Quite frankly, the light touch continues,” says Viacom18’s Vats. “In the period when Raghav Bahl was the chairman, in a year his intervention was limited to 12 phone calls. It is the same light touch now. Our financial performance too has been good — another reason for not needing intervention,” adds Vats.
As part of the new expansion plan for the entertainment television into regional markets, the five ETV entertainment channels will be brought under the Viacom18 umbrella. To give the regional foray heft and financial muscle, Viacom through its subsidiary Nickelodeon Asia will take a 50 per cent stake in holding company Prism TV, while TV18 will continue to own the remaining 50 per cent. The quantum of investment Viacom has sought to invest in Prism TV has not been disclosed.
“Viacom has applied for Foreign Investment Promotion Board clearance, and this could come through as early as in a month’s time,” says Vats. In the meanwhile, the Union Ministry of Information & Broadcasting (MIB) has given permission for a brand licensing agreement between Viacom18 and Prism for the use of the Colors brand, he adds. Viacom18 operates 10 channels currently. Apart from the flagship Hindi GEC Colors, the offerings include MTV, Vh1, Comedy Central  and kids channel Nick. With the addition of five ETV channels, Viacom18 broadcasting portfolio will increase to 15 channels.
Justifying the rebranding exercise, Vats says an in-house research on the ETV brand had revealed that it was looking jaded with content catering to an older generation. “Colors, on the other hand, is seen as a younger, more appealing brand. By extending the Colors franchise to the regional channels, we hope to rope in a lot more youth as viewers,” he says.

Regional Strategy
Outlining the regional strategy of the group, Vats says, “As much as 59 per cent of the country converses in regional languages. Today, regional TV channels command the second largest viewership in India. The expansion fuels our growth strategy in building the Colors franchise.” Each of the five ETV channels will be rebranded over a two-month period with the changeover pegged for each channel with a local festival. Colors Marathi, for instance, will be launched on 22 March on the occasion of the festival Gudi Padva.
Vats is, however, non-committal about launching the Colors franchise for the other big regional markets such as Punjab, Tamil Nadu and Andhra Pradesh. ETV Telugu continues to be owned by the Eenadu Group, and perhaps the non-compete cooling off period is yet to end. “We are looking at those options too; but we are currently concentrating on consolidating the existing channels,” he says.

The Viacom18 chief reveals that a slow integration has been going on quietly over the recent months with Colors programming and concepts being used by the regional ETV channels. The popular Big Boss reality show was separately shot for ETV Kannada and Bangla, and it did well in those markets. Similarly, the soap ‘Ballika Vadhu’ was produced for ETV Bangla and ‘Uttaran’ for ETV Kannada. For the new Colors regional channels, Vats expects to ramp up non-fiction content along with some what he calls ‘marquee events’.
The project to extend and market the Colors brand and integrate the five ETV channels in the Viacom18 fold is headed by Ravish Kumar and Anuj Poddar, both executive vice-presidents and business heads of the new ETV channels.

Licence Raj
Talking of the licensing regime, Vats, who is also the chairman of industry body CII’s media & entertainment committee, says that for an entertainment platforms such as Viacom18, the clearance process was outdated and cumbersome. He says while channel licences were given for 10 years, broadcasting rules required a security clearance from the Union home ministry every three years. This meant submitting and getting the green signal from the home department of all the directors of the broadcasting company’s board. For an entertainment company, this was an overstretched requirement, he felt.
“Licensing for entertainment companies should be a thing of the past. Regulatory bodies such as the MIB should be limiting themselves to policies and penalties,” he suggests. “If there is a breach of rules, or violation of content, then the fines and penalties should be heavy,” adds Vats.
(This story was published in BW | Businessworld Issue Dated 06-04-2015)
Tags assigned to this article:
magazine media and entertainment gurbir singh colors network 18 etv issue9list viacom magazine 06 april 2015 prism tv