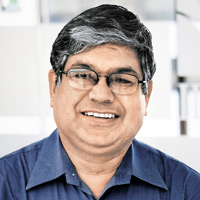 Every year, there are new strategies to manage the monsoon — sometimes strategies for deficit and low rains or even floods. The unpredictable course of the monsoon every year raises concerns on agriculture production and food security. Food security may not be a concern as of now because current stocks can sustain two droughts. But long-term food security lies in raising the production of staples and increasing farmers’ income through agriculture diversification via high-value farming such as horticulture, livestock and fisheries.

Limited research and disconnected investment between public and private (sectors) in irrigation have slowed the process of development. Wheat and paddy have always dominated the research and development agenda, with too little attention being paid to other crops such as millet, pulses and oilseeds. Investments in technology and improved varieties such as drought-resistant crops will help achieve higher yield despite low irrigation facilities.

Conservation and rainwater management hold the key for sustainable agriculture in the short and long run. Considering the use of rainwater while designing irrigation projects will help strengthen the goal. The scope towards watershed development needs to be expanded by strengthening the knowledge base, maintaining previously created assets and bringing in better convergence between watershed development projects and the Mahatma Gandhi National Rural Employment Guarantee Scheme, which will bring considerable synergies. The anticipated size of the allocation towards watershed development under the 12th Five-Year Plan (2012-17) is Rs 36,460 crore, which will include completing ongoing projects, partial costs to cover a proposed area of 25 million hectare (mha). There are also plans to take up pilot projects for special areas.

The ultimate irrigation potential (UIP) comprising of major, medium and minor irrigation sectors is estimated at 140 mha and about 74 per cent of the UIP had been connected till the 10th Plan. Expansion in drip and sprinkler irrigation is an important area to explore — which changes over time, depending on land use and the cropping pattern, irrigated area and the level of groundwater exploitation across states. There is a total potential of 69 mha (27 mha under drip and 42 mha under sprinkler) to be achieved under micro irrigation. During the 11th Plan, 2.27 million hectare had been covered till March 2011.

Policymakers should now focus on completing existing irrigation projects and reviving water resources through artificial groundwater recharging. They should also promote and strengthen watershed development, building existing reservoirs with minor repair and improving water-use efficiency above the current level of 25 per cent. Policies should be created to bridge the gap between the irrigation potential and irrigation utilised needs, with immediate actions to adopt better management practices.

Despite all the right efforts and assumption, what is missing here is that each irrigation project takes its own course. Smaller, but important efforts of introducing training, demonstration and evaluation of existing projects need to be initiated. Training of farmers must include educating them on various problems and bottlenecks related to proper agricultural practices and explain the disadvantage of wastage vis-a-vis irrigation. One such step can be to involve farmers in the distribution of irrigation water at the field level to explain the mechanism of management of irrigation systems. Another is the introduction of e-kiosks or e-choupals as platforms for interaction and networking of farmers and to equip them with day-to-day market information and knowledge. Before-time information will help farmers decide the crop as per the monsoon movement. Efforts are needed to popularise water-saving techniques such as sprinkler and drip irrigation in water-deficit areas. Greater focus on agricultural extension and rainwater management across different agro-eco regions will help bring in more synergies among players.

Agricultural insurance, especially the weather-based one, is a method that can protect farmers’ earnings and protect them from losses from natural calamities. It will act as a cushion to the shock of crop losses by providing farmers with a minimum amount of protection. Expansion in weather-based insurance with localised cover on low rains or more rains, cloud bursts and hailstorms will offer added protection to farmers. The imperfect correlation between the insurance cover and farmers’ losses result in receiving no claim. So, expanding the coverage of agricultural insurance — especially to the drought-prone areas — will help farmers cope with losses due to drought. Similarly, credit at subsidised rates for developing water conservation structures and using available options to improve water use efficiency will not only help manage drought, but also enhance farm productivity and income.