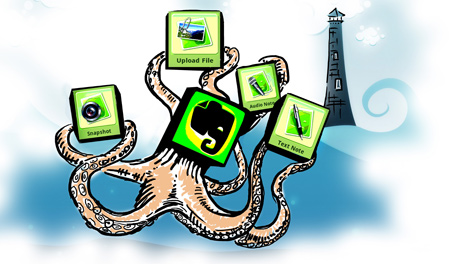 
Apart from just typing in notes, you can sketch, take or import photos, put in audio notes, jot down ideas, recognise text from captured images and clip things from webpages — or the whole web page. The Web Clipper, for which you can put a bookmarklet on your browser on the PC, makes collecting research in one "notebook" easy. You can put in anything you don't want to lose track of and you can search for it when you want to call it up.

Abhishek Baxi, a fellow tech journalist and ardent Evernote user (on PC and Windows Phone, which he thinks is the best platform for the app) put it to use to ensure his wedding went off like clockwork. "It was a small, but crucial tool that ensured my wedding went off smoothly; with happy relatives and cherished memories," he says. Abhishek, who uses Evernote for work, began to use it for his wedding plans the moment the date was set. It was then that the pressure of organising everything suddenly came to the fore. "That was when I created a separate ‘wedding' notebook in my Evernote account," he says. "Following tradition, while my mum was having the final word, I was the person organising everything from bookings, invitee lists, wedding attire, family giveaways, caterers and even the finances." He even shared a notebook with a friend who was helping him with wedding-related shopping. Collaboration with others is another important aspect of  Evernote because you can share, comment and add to content. The add-on apps bring in new capabilities to the ecosystem. For instance, Evernote Hello (unfortunately only on the iPhone) lets you take a picture of a person you meet, add contact information, and then jot down notes. This way, you can keep information on every meeting if you want to.

All of what you do in Evernote is tied into an account that you sign up for. There's a free and premium version ($45 a year), depending on amount of space and usage. The free version has limited access to files offline — remember this is a cloud-based service.

Taken individually, you'll find the functionalities in this app available elsewhere too. There are thousands of full-featured note-taking apps that include text, writing, pictures, audio memos and more. There are also people widgets and scrapbooking apps. It's the integration of everything together on a robust platform that makes its almost 30 million users happily dependent on it.

Evernote recently announced a $70-million Series D investment led by Meritech Capital and CBC Capital, meant to be used to expand  the company with acquisitions. Their footprint is increasing, extending from China to the US. Evernote is fairly active in India and Troy Malone, general manager, Asia-Pacific, at Evernote, visits India often, especially to meet developers to create localised or otherwise innovative features and apps for the product.

(The author can be reached at mala(at)pobox(dot)com, (at)malabhargava on Twitter)