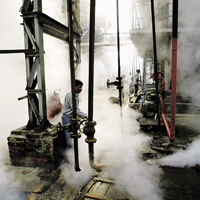 As the Indian climate warriors start thinking of ways and means to cut down carbon emissions in line with their commitments, one method of reducing emissions is already proving to be a non-starter. The great hope that ethanol-blended fuels would reduce emissions while simultaneously cutting down India's oil bill is turning out to be misplaced. In the first week of December, food and agriculture minister, Sharad Pawar, petroleum minister Murli Deora and new and renewable energy minister Farooq Abdullah met to review and resolve the issues of the original plan which envisaged blending 5 per cent ethanol with every litre of petrol, by 2011. The conclusion they reached: ethanol blending was an impractical plan.

Ethanol blending in India is proving difficult for a variety of reasons — from the price promised to ethanol producers to the amount of land that can be devoted to production of sugarcane, the prime raw material for ethanol in India.

Over the past three years, several states have struggled but failed to implement the original plan. According to official documents available with BW, 19 states produced only 49 per cent of the required quantity till September 2009. Some have not even been able to initiate the process (see ‘No Fire In This Fuel').

Ethanol has been a success story in countries such as Brazil, the US and South Africa. According to the US Energy Protection Agency, ethanol's high oxygen content reduces carbon monoxide levels by 25-30 per cent, more than any other oxygenate. Ethanol blends dramatically reduce hydrocarbons emissions — a major ozone layer depletor. The agency studies also conclude that high-level ethanol blends reduce nitrogen oxide emissions by up to 20 per cent and can reduce net carbon dioxide emissions by up to 100 per cent on a full life-cycle basis. As an octane enhancer, ethanol can cut emissions of cancer-causing benzene and butadiene by more than 50 per cent and significantly decrease sulphur dioxide and particulate matter emissions.

In India, oil companies are keen on selling ethanol-blend fuels but procurement is nowhere close to the required level.

The Cost Factor
The price to buy ethanol for blending was set by the government at Rs 21.5 per litre in the tenders floated in 2006. However, the market price of ethanol currently is Rs 50-55 (it was Rs 40-45 in 2006). "We are bargaining with them to reach to the level of Rs 25-26 per litre (ex-depot) price. But they are not agreeing to this," says an oil company executive.

Ethanol producers see no reason to sell at such low prices when they can sell at higher prices to the chemical and the potable liquor industries, both major consumers of ethanol.

Oil companies have calculated the price of ethanol at Rs 14 per litre as per the calorific value (the amount of heat produced on combustion). Even if the rate is revised to Rs 26-27 a litre, shortfall in supply will remain. An acquisition price higher than this would make blending with petrol uneconomical. In fact, ethanol suppliers and oil companies had met in November, but this meeting too ended in a deadlock. A joint committee set up to look into the ethanol procurement issues has been asked to look at the best cost of the produce.

Sweet Nothings
Although three ministries are supposed to be coordinating in the issue, the minister of state (independent charge) for environment and forests, Jairam Ramesh, does not see any future for biofuels. "Biofuel does not have a relevant role in the Indian context in view of land limitation and food security," he said while speaking at a conference on environment friendly vehicles, in New Delhi in November. "We have land limitation and huge population pressure. We have to have food security," he maintained and added that though "it (biofuel) may play a small role, but a big role has to be from the hybrids, auto-electric and, of course, the CNG vehicles." This is in contrast with the government's stated goal of 20 per cent ethanol blending with fossil fuels by 2017.

Another concern is the falling sugarcane production in India. "It is becoming commercially unviable to use ethanol as a blend," says S.L. Jain, director general of Indian Sugar Mills' Association. Demand for molasses and ethanol in the alternate market (liquor and chemicals) is going up, while the supply is limited, adds Jain.

Moreover, there is limited land under sugarcane and, therefore, limited ethanol supply, say officials in the ministry of agriculture. A surge in demand for sugarcane could lead to sugar prices going beyond limits. Ministry officials add that India is not in a position to repeat Brazil's success, and that the phenomenon has failed in most other countries. A 2008 McKinsey study of US ethanol infrastructure revealed that although constraints in distribution are still to be overcome for the industry to grow, the US market has seen a surge in price of corn, the raw material for ethanol in the US, and other corn produce. Further, ethanol blending is facing a controversy even in the US because a number of studies claim that ethanol is actually energy negative — that is, it takes more energy to produce it than the amount it releases.

Vexing Mix
At the state level too, ethanol procurement is facing hiccups. Taxation and licence fee structure on import and export of ethanol and ethanol-based products often act as deterrents. Procurement has been just 1 per cent of the contracted quantity in Tamil Nadu and Kerala, 2 per cent in Jharkhand and nil in Orissa, West Bengal and Chhattisgarh over three years.

The Chhattisgarh government has not cleared any no-objection certificates (NOCs) for supply of ethanol. West Bengal has created many filters and stipulations such as issuance of licences including for locations for custody of ethanol during transportations, and dual locking of ethanol tanks jointly by excise officers and operation officers.

Taxes levied by states result in an increase in the price of ethanol. "The purpose is to reduce the price of the fuel along with making it more environment-friendly. But if such taxes are levied, it would not help," says a senior officer from ministry of petroleum. In Jharkhand, for instance, although ethanol supply started in July 2007, it stopped after an import fee of Rs 1,000 per kilolitre was imposed. UP has imposed a tax of Rs 1,500 per kilolitre on export of ethanol and has deterred import of cheaper supply through a tax of Rs 1,000 per kilolitre.

The petroleum ministry may be keen to push forward ethanol blended fuel for environmental and economic reasons, but this is far from possible as there is more than 50 per cent shortfall in procurement, and discussions between the involved parties have as yet yielded little in way of solutions.