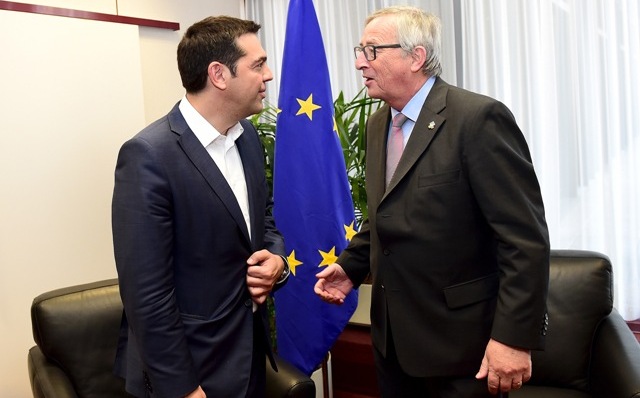 16 June, 2015
Print this article Font size -16+
EU officials have held their first formal talks on the possibility of a Greek default, officials said on Friday, but the darkening outlook failed to fluster Prime Minister Alexis Tsipras, who holed up with his negotiators after proclaiming optimism at an open air concert.
In Athens, a government official denied that the possibility of Greece failing to honour its debt commitments had been discussed by the European Union, and said meetings with creditors would resume in Brussels on Saturday.
No one knows, least of all in Athens or Brussels, whether the anti-austerity government can reach a deal with its lenders before an end-June deadline and thereby avoid putting the country in grave danger of crashing out of the euro zone.
But senior euro zone officials are taking no chances, and discussed a series of scenarios in Bratislava late on Thursday, several officials told Reuters. These included a possible default on a 1.6 billion euro ($1.8 billion) payment that Greece must make to the International Monetary Fund, the global lender of last resort, at the end of this month, they said.
While Europe let loose a barrage of warnings, the leftist Greek government exuded calm and optimism. A cheerful Tsipras was mobbed by supporters late on Thursday at an open air concert to celebrate the reopening of a TV station, still wearing the blue suit he had worn at crisis talks that morning in Brussels.
His boisterous mood belied his tough talks with German Chancellor Angela Merkel and French President Francois Hollande on Wednesday, and European Commission President Jean-Claude Juncker on Thursday. Juncker jokingly called the meeting room a "torture room".
The failure to break the stalemate prompted the IMF to send home its team of negotiators on Thursday.
Nevertheless, the Greek government official said Athens was ready to submit counter-proposals to bridge differences with its creditors at the EU and IMF, and hoped for a deal when the Eurogroup of euro zone finance ministers meets on June 18.
The Bratislava talks, called to prepare for the Eurogroup meeting, concluded that there were three scenarios, and that the best of them, reaching a deal next week, was the least likely.
The second scenario was a further extension of Greece's current bailout programme, which expires this month at the same time as Greece must repay the 1.6 billion euros to the IMF. The third - discussed formally for the first time at such a senior level in the EU - was to accept that Greece could default.
The meeting reached no decision or concrete conclusion, the officials said.
Extreme Scepticism
Most officials argued it was unlikely that creditors, which include the European Central Bank, would strike a cash-for-reforms deal with Athens in time to disburse 7.2 billion euros still available under a rescue programme extended in February for four months.
"It would require progress in a matter of days that has not been possible in weeks. The reaction of the ECB, the IMF and several member states was extremely sceptical," one official familiar with the discussions said.
The Greek representative in Bratislava said Athens would do everything to reach a deal in time, other officials said.
Merkel urged Athens and its creditors on Friday to keep pushing for a deal. "Where there's a will there's a way, but the will has to come from all sides so it's important that we keep speaking with each other," she told a conference in Berlin.
Tsipras's government was elected in February promising to reject the austerity policies it says have worsened one of the deepest economic depressions in modern times. It says it wants a deal with creditors that would keep Greece in the euro zone, but not at a cost of violating "red lines", such as deeper cuts to pensions and workers' rights.
Common Cause
Thursday's departure of IMF experts gave Athens one area of common cause with its European creditors.
"The non-participation of the IMF in the political negotiation amounts to nothing more than putting pressure on everyone - the Commission, the ECB, Greece," a Greek official said. "It is piling pressure in all directions - especially Berlin - with the aim of implementing tough policies in Greece in order to secure its money."
Tsipras has tried to create an impression of business as usual. His first engagement after returning from Brussels on Thursday was a concert celebrating the revival of the ERT state TV station, closed exactly two years ago under cuts ordered by the EU and IMF lenders.
Tsipras cheered the event - and the reversal of austerity it symbolised - as "a celebration of democracy".
"It is not the government that reopened ERT but the struggles of the Greek people. Today we should all be happy and look to the future with optimism," he said.
Tsipras met for about three hours with his negotiating team on Friday. His deputy prime minister and chief negotiator will lead the team in Brussels on Saturday.
Renewed uncertainty put European markets on the backfoot and sent Greece's top share index down almost six percent on Friday. The German Bild newspaper reported that the German government was holding "concrete consultations", including about how Athens might introduce capital controls restricting bank withdrawals in Greece and transfers abroad should the country go bust.
Economists believe a solution remains possible but acknowledge that the creditors may soon tell Athens to accept their demands or face "Grexit" - market shorthand for Greece becoming the first country to exit the euro zone.
"We are getting close to ... this take-it-or leave-it scenario," said Derek Halpenny from the Bank of Tokyo-Mitsubishi. "But nobody in my view is ready to trade the 'Grexit' view yet. The expectation is still that a deal will be reached."
Standard & Poor's credit ratings agency downgraded four Greek banks on Friday. This followed its cut of Greece's sovereign rating on Wednesday deeper into junk territory.
(Reuters)
Tags assigned to this article:
europe germany greece news 9 european union angela merkel brussels francois hollande alexis tsipras europe debt cisis