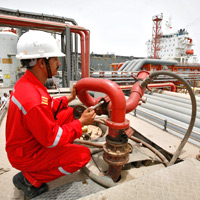 08 November, 2014
Print this article Font size -16+
Essar has shut down all units at the UK's No. 2 refinery due to a steam supply issue on Tuesday (4 February) and said it did not yet have an estimate for when the plant could resume operations.

"We are now working to restore steam supply and effect a safe re-start," he said.

The Stanlow refinery supplies 15 per cent of the UK's fuel needs, shipping it around the country by road and pipelines, Essar's website said. It has broadened its crude slate to increase its use of West and North African and Canadian crude alongside North Sea oil.

The plant underwent a substantial turnaround towards the end of last year, refurbishing a gasoline-making catalytic cracker for around $35 million.

Essar is an Indian-owned company with a refinery in India and interest in a refinery in Kenya. It also has power and upstream oil and gas operations.