Enjoyed lifting 2007, 2011 WC trophies together and many on-field partnerships: Yuvraj to Dhoni

Enjoyed lifting 2007, 2011 WC trophies together and many on-field partnerships: Yuvraj to Dhoni

New Delhi [India], Aug 16 (ANI): Former India all-rounder Yuvraj Singh on Sunday congratulated former skipper Mahendra Singh Dhoni for his retirement and said he enjoyed lifting 2007 and 2011 World Cups and many on-field partnerships with the wicketkeeper-batsman.
"Congratulations @msdhoni on a great career! Enjoyed lifting the 2007 and 2011 WC trophies together for our country and our many partnerships on the field. My best wishes to you for the future," Yuvraj tweeted. 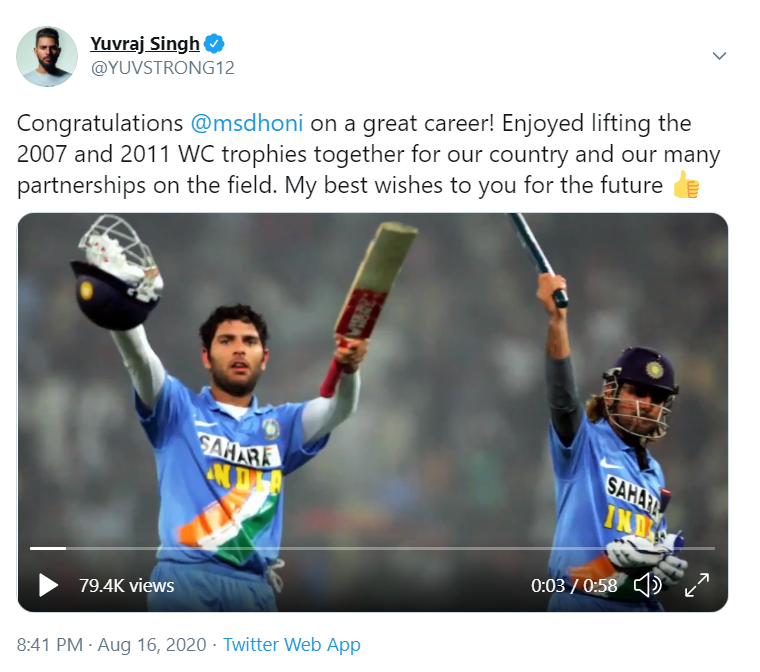 Yuvraj also shared a 58-second video paying tribute to Dhoni and sharing on-field moments with him.
The all-rounder was part of the 2007 T20 World Cup-winning team and as well as 2011 World Cup-winning side. India won both the trophies under the leadership of Dhoni.
On Saturday, Dhoni had announced his retirement on Instagram. The wicket-keeper-batsman Dhoni shared a video and captioned the post, "Thanks a lot for ur love and support throughout. from 1929 hrs consider me as Retired."
The video had the iconic song 'Mai Pal Do Pal Ka Shayar Hu' from Amitabh Bachchan's 'Kabhie Kabhie' playing in the background and in it, Dhoni shared his incredible journey in the Indian side including his run out in the last game against New Zealand in the World Cup 2019 semifinal.
He is among the most successful captains in world cricket. It was under his leadership that India lifted the ICC Cricket World Cup in 2011 after having led India to triumph in the ICC World T20 in its maiden edition of the tournament held in 2007 in South Africa.
With India winning the ICC Champions Trophy in 2013 in England, Dhoni became the first and is still the only captain to date to have won all three ICC Trophies.
Unarguably the quickest man behind the wicket, Dhoni has 195 international stumpings, the most by any wicket-keeper. Dhoni played 350 ODIs with his highest score being 183 against Sri Lanka.
Also referred to as 'Captain Cool', Dhoni is known for his calmness and exquisite captaincy on the field. He was also known for his knack of opting for reviews and many have jokingly remarked to change the 'Decision-Review System's' name to 'Dhoni-Review System'.
In December 2014, he announced his retirement from Tests and gave a chance to the likes of Wriddhiman Saha. Dhoni called time on his Test career after playing 90 Tests, managing to score 4,876 runs at an average of 38.09.
Dhoni was slated to return to the cricket field on March 29 during the IPL's opening match between CSK and Mumbai Indians. However, the tournament will now be played in the UAE from September 19 to November 10. He will continue to captain CSK in the IPL 2020. (ANI)