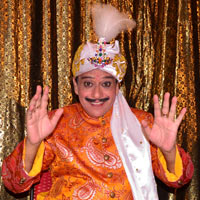 08 November, 2014
Print this article Font size -16+
Who is the best magician of the world? Prodip Chandra Sorcar Junior has no doubt, "Government of India!" There is an obvious spell of irony in his words. He hints at the good many vanishing acts of "B. Sarkar aka Bharat Sarkar". And when he says this on stage in Delhi’s Ficci Auditorium to a thickly packed audience, the crowd laughs out rolling. This tinge of sarcasm is one of the many things that make the magician Sorcar a class apart and places him well above most of his contemporaries. But he chooses to be humble. "I am a people's magician," he says sitting cosily on a well-rounded stool inside a small square of the huge stage.

It's a balmy Sunday evening. This is P.C. Sorcar Jr's one of the many visits to the capital. His show, Indrajaal, has just seen one more edition. The show is over, and there is a serpentine queue of kids and parents who throng to meet the magician. "I love kids; they enjoy magic and learn the right messages," he says. His assistants quickly lead him down. He walks briskly. Once down, he is surrounded by the small crowd. Sorcar is patiently signing autographs. And his glittering attire beams in the fluorescent light. He shines on. There is a special child on a wheelchair who is visiting from a long end of the city to meet the charmer. "Abracadabra!" Sorcar tries to cast a spell on the boy and the child is overwhelmed. "Kids hold the future; they build the country brick by brick," says Sorcar. He waves them adieus and walks back on to the stage.

The stage features gigantic curtains and deep silence. Sorcar sits on his seat. He is 66 years old, but sporting a sparkling white headgear dotted with artwork and jewellery, he looks much younger and agile. He is on a dark yellow silk kurta; the fabric looks really thick and at the same time hollow inside. Of course, magicians wear strange attire that helps them hide secrets. "Yes, secrets are the cornerstone of our success; but at times we too do things that are obvious to the audience's eyes, but they suspend logic for that moment and take part in the entertainment act," says Sorcar.

Tools Of The Trade
Unlike other arts, magic interacts with the psychology of the public. But don’t art forms like cinema do the same? "No," he says. "Cinema is the art of editing, and there is an element of deception. But in magic, especially in the kind of work we do; minds are at work. That's why it becomes riskier and, hence, amusing." And that's why Sorcar hates magic on television. "Such shows are exposing magic; and they cause value erosion to the art form." But haven't these shows helped popularise the art? "Could be. But they have done more damage than good." Sorcar says edited shows lack the kind of surprise his live shows offer. Sorcar holds a degree in applied psychology from the University of Calcutta. So does this come handy when charming people? "Of course! Magic is the art of playing with human psychology. Illusions are psychological exercises," he beams.

Magic, believes Sorcar, is the peak of excellence or talent. "When you listen to Zakir Hussain on tabla, you would say, 'it's magic! Yes, no other art form enjoys such a stature. But that brings in a lot of challenges to the magician. He is expected to be perfect and, at the same time, entertaining to the core." He also feels that magic has a therapeutic value. It might not offer a catharsis, but it heralds the power of humankind and allays superstitions. Magicians perform humanly impossible and unbelievable acts and, still, choose to be down-to-earth human, while crooks and godmen employ similar tricks or substandard gimmicks and hoodwink people by claiming they were reincarnations of some supreme celestial beings. "That's why I say magicians help build a progressive society where superstitions and false beliefs do not hold ground," says Sorcar. He practises what he preaches.

For the uninitiated, Sorcar has been a vociferous critic of demi-gods and babas. His now famous verbal duels with the late Sathya Sai Baba of Puttaparthi has brought him global acclaim and made him a darling of rationalist movements across the globe. "Magicians are flag bearers of a progressive society. In many cases, they even give leads to science," he says. One notices that most of the illusions in Indrajaal involve use of technology. How has the advent of technology helped the art of magic? "Immensely," says Sorcar. "It helped magic tread unseen levels of illusions. Even today, it keeps changing and redefining the world of illusions. It is helping in making magic impressive and wonderful." Science and magic are wedded together, feels Sorcar. "Magic is science."

All In The Family
This is one of Sorcar's many visits to the Union Capital and this time he is accompanied by daughter Maneka and wife Jayashree Devi. Maneka is arguably the first woman magician of India and has done several shows across the globe. "I am proud of her becoming the flag bearer of the Sorcar family of magicians," says Sorcar. His father P.C. Sorcar (Protul Chandra Sorcar), a legend, died in 1971 in Hokkaido, Japan, while performing a show. Without doubt, the junior Sorcar inherited a rich legacy from his father. And he believes he has done justice to the tradition. Yes, he is successful. His shows run to packed houses and he globetrots most of the year. And he is a good businessman too. Sorcar reportedly holds the highest individual foreign exchange earner in entertainment. What's the magic figure? "I don't know much about it. The income tax department might be able to give you the real picture," he quips.

So, is it a good business? He answers in the affirmative. According to reports, Sorcar reportedly charges $20,000 for a show. But how many can make it a sustainable career? "See, there is money in success. Not many can make it really big. Not many can be the No.1. There is only one Pandit Ravi Shankar in sitar!" He dedicates his success to his hardwork."My mother Basanti Devi taught me to work hard and be optimistic. She was my great inspiration. She taught me to be resilient and industrious," he says.

Sorcar took to magic in his early childhood. And ever since he has built an impressive portfolio. His vanishing acts include The Taj Mahal and the Indore-Amritsar Express. What does he want to do now? He dodges the question. "I don't have any big ambitions left. I have a great legacy and I am humbly furthering it. I am happy and proud that Maneka is extending it even further. That said, I keep experimenting. I am not a man of tall claims and little action. If someone else claims that he has disappeared the Taj Mahal, you should ask for proof. On television, you can do anything; it involves cameras and editing, but can you do those things live, before human eyes, is the question. When I make a train disappear, I will do it in front of experts and the public who can vet my act and approve its merit. It's not like taking claims on Facebook and getting fans to 'like' it," says Sorcar candidly. His eyes twinkle when he says he makes no illusions about his art, he has only truly realistic takes on it. At that moment, Sorcar reminds one of the Shakespearean duke-magician Prospero who said, "Spirits, which by mine art/I have from their confines call'd to enact/ My present fancies." We sign off and Sorcar quickly gets up and walks out through the back door. As the hall mangaer switches off the lights one by one, the scene looks like a straight lift from one of his famous escape acts.