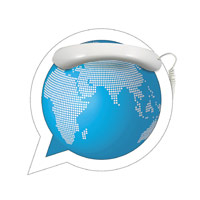 05 February, 2015
Print this article Font size -16+
Give Me A Ringo
There has never  been an ideal solution to international calling, unless you're willing to pay heavily.  Ringo is a free app for iOS, Android and Windows phone that  offers a cheaper way to call abroad, though it's still best to do the math first for your expected duration of calls, frequency of calling and the countries where you'll

call, as calling rates differ widely. You do have many calling services such as those via Skype, Viber, Fring and even Facebook, but these need a good rock steady Internet connection — not something we have all the time. Ringo doesn't use the Internet for the full call itself. But the app does that for you to request a call (international only) and to buy credits. You get a call back, after which it's clear unless the recipient has something going on at the other end. Ringo uses local carriers with that call-back.

Ask Me Anything
Well known people have been doing ask me anything (AMAs) in various places online. A fairly new app, Frankly.me for Android, iOS and on its website frankly.me, aims to create a platform on which anyone can ask a public figure what they like, and get a video answer. Rather ambitious, and I'm not sure how the

Whatsapp Everywhere
For those who've got into the Whatsapp habit, you needn't miss a moment. Recently, the app has moved to the Web. As long as you're using the Chrome browser you can head to Whatsapp.com and scan the QR

code that will appear, using your phone. In the up-to-date Whatsapp application, you'll find the Whatsapp Web option from the menu. It prompts you to scan the QR Code, framing it to guide you. Whatsapp is then replicated on your PC screen and you can do everything you do on the phone version on the Web app as well. It's a nice seamless switch and very convenient for those who use the phone and a computer a lot. It's not to be found on Apple machines though.

Remember to sign out of the computer though, or someone else will get a good look at your messages.