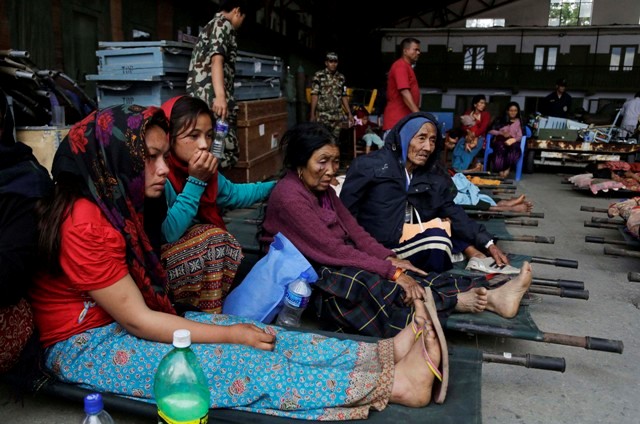 29 April, 2015
Print this article Font size -16+
The death toll in Nepal's earthquake could reach 10,000, Prime Minister Sushil Koirala told Reuters on Tuesday, ordering intensified rescue efforts and appealing for foreign supplies of tents and medicines.
"The government is doing all it can for rescue and relief on a war footing," Koirala said. "It is a challenge and a very difficult hour for Nepal."
Crisis loomed over the quake-hit country with an acute shortage of food, water, electricity and medicines as fear of another quake kept tens of thousands of people out into the open.
More than 4,300 bodies have so far been recovered after Saturday's massive earthquake that struck just outside of capital Kathmandu, a Nepalese police official said. A further 8,063 people have been injured in the quake.
Hundreds of people are still trapped under tonnes of rubble in the capital Kathmandu and some of the worst-affected remote mountainous areas amid concerns that toll could cross 5,000 mark, authorities said.
The government has announced nine districts as highly-affected areas.
Based on human casualty, Sindhupalchowk, Kathmandu, Nuwakot, Dhading, Bhaktapur, Gorkha, Kavre, Lalitpur and Rasuwa have been declared as the most-affected districts.
The government has said that altogether 60 districts have been affected by the earthquake.
Of those killed in the earthquake, 923 are from Kathmandu, 240 from Bhaktapur and 157 from Lalitpur while the rest are from outside the Kathmandu Valley.
Koirala has admitted that the rescue, relief and search operations have not been effective. He has urged the political parties to work together in this national crisis.
Post-quake management is challenging, Koirala said in an all-party meeting organised on Monday by Constituent Assembly Chairman Subas Nembang.
International aid has finally begun arriving in the Himalayan nation of 28 million people but disbursement is slow.
The government has been unable to extend rescue efforts to several places due to a crunch of logistics and experts.
(Agencies)
Tags assigned to this article:
news 3 nepal natural disasters nepal earthquake kathmandu sushil koirala