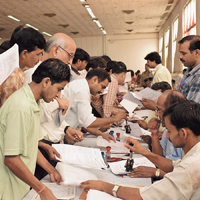 08 November, 2014
Print this article Font size -16+
Retirement fund manager EPFO will launch an online facility tomorrow where over 5 crore subscribers can view their updated accounts.
"We will launch the facility tomorrow where subscribers can track their accounts online on a real-time basis and check their updated accounts," EPFO's Central Provident Fund Commissioner K K Jalan said.
At present, subscribers get account statements once a year. The Employees' Provident Fund Organisation (EPFO) has to dispatch annual PF account slips by September. The PF slips for 2012-13 are supposed to be provided by September 30, 2013.
Sometimes, it takes longer to receive the statements because the EPFO hands them over to employers for distribution to workers.
The new facility will enable subscribers to see their updated accounts and take printouts for their records.
Jalan said EPFO members would be able to see their account balances, including credited interest, as of March 31.
For the period starting in April, they would be able to see the amounts credited to their accounts every month without the interest component because the rate of return on PF deposits for this fiscal has not been announced, he added.
Jalan also said the EPFO will issue annual PF account slips on demand.
The facility will be launched by Labour Minister Sis Ram Ola tomorrow morning at the EPFO headquarters in the capital.
All members, including those with inoperative accounts, will benefit from online access, Jalan said. The EPFO makes accounts inoperative when a contribution is not made for 36 months in a row.