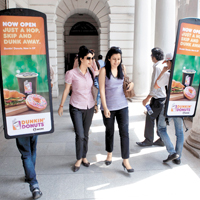 New Avatar
From 1 June onwards, popular Hindi news channel STAR News will have a brand new name — ABP News. Bengali news channel STAR Ananda will be developers can soon charge a fee for apps sold in the store. The store comes at a time when Facebook has said that growth in mobile use could hurt future advertising revenues.renamed ABP Ananda, while Marathi news channel STAR Majha will be rechristened ABP Majha. The 24-hour news channels are owned by Media Content and Communications India, a subsidiary of the Ananda Bazar Patrika Group.

On Steroids
Pharmaceuticals major Ranbaxy Laboratories' first-quarter net profits have recorded a 310 per cent rise to Rs 1,247 crore from a year ago thanks to robust growth in its North American sales, which went up to Rs 2,093 crore from Rs 769 crore a year earlier.

Dirty Business
The Parliamentary Standing Committee on Finance — headed by former finance minister Yashwant Sinha — has recommended a joint mechanism to scan fund flows into stock exchanges. It says banks by themselves cannot stem the flow of tainted money. The panel also called for a crackdown on multi-tiered entities floated for black money transactions in tax havens.

Clean Bill Of Health
If you are a doubting Thomas of the US banking system, listen to Warren Buffett. The investing luminary, whose Berkshire Hathaway has invested more than $19 billion in US banks, says the lenders had ample liquidity and were a class apart from European rivals. Buffett says the US banking system is in "fine shape", while the European system "was gasping for air a few months ago".

More In Store
Facebook has launched its own app store. The App Center will promote mobile programmes that operate on social networks. Facebook says

Boost For BB
This is sure to give ailing RIM some confidence. The company says the US defence department (Pentagon) has approved six models of BlackBerry 7 for use on its networks. RIM's smartphones are known for their tight security.