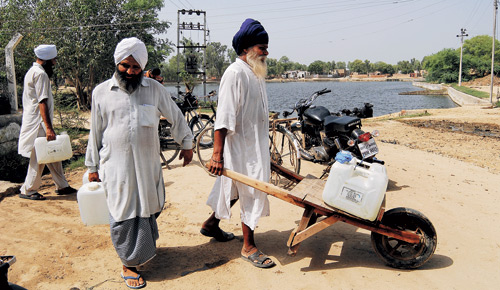 Five years ago, K. Anji Reddy, founder-chairman of Hyderabad-based Dr. Reddy's Laboratories, one of India's largest pharmaceutical firms, flew down to Chennai to meet old friend Mohan Nair, a patents expert. "I want to start a new lab," Reddy told him, adding that he intended to provide safe drinking water to every Indian household by 2020.

Nair heard him out with disbelief, but nonetheless directed Reddy to a California-based company called WaterHealth International, of which he was advisor. The company hawked a water purifying plant — licensed from University of California — that used ultraviolet light to kill harmful organisms in water. Unable to sell enough units of the plant to break even, it had filed for bankruptcy in 2002.

In Reddy, the company found a saviour who pumped in $1 million to help it service orders. "In India, people are still dying because they don't have access to safe drinking water," says Reddy. "And here was a technology looking for money that could mitigate the problem." In a country where 21 per cent of communicable diseases such as diarrhoea, jaundice and hepatitis A and E are water-borne (according to the World Bank), any initiative to provide potable drinking water is welcome. And it is something that Reddy, 68, has taken to with gusto.

Reddy always had this ‘go it alone' streak in him. In founding Dr. Reddy's in 1984, he sparked a country's imagination through his dream of turning it into India's first discovery-led pharma company. While that dream is still to materialise, Reddy has now broadened his efforts to include the larger society. Initially starting off with irrigation — Reddy's not-for-profit organisation, Naandi Foundation, revived 5,000 defunct government irrigation schemes in Andhra Pradesh and set up farmers' cooperatives that today run and maintain themselves — he soon dreamt up the safe water scheme. After investing in WaterHealth, Reddy first targeted his home state, Andhra Pradesh.

The Journey Begins
A study conducted by Naandi in the districts of Andhra Pradesh had shown that farmers were drinking water contaminated with faeces.

WaterHealth's plants were perfect for the job, but they were expensive — $50,000 each. "We had to come up with an innovative idea to finance the plants," says Manoj Kumar, Naandi's CEO. "We convinced some farmers to pool in $5,000 upfront, while ICICI Bank agreed to loan another $30,000 for each plant." Naandi would collect the remaining $15,000 from villagers over the years. "NRIs (non-resident Indians) also contributed money to set up plants back in their village," says Reddy.

The first water plant was set up in February 2005 in Bomminampadu in Krishna district. Water was pumped from the ground, processed by the plant and stored in 5,000-litre tanks, from where villagers came to collect it every day. For every 10 litres, Naandi collected Re 1, which went towards repaying ICICI Bank's loan.

Today, Andhra Pradesh has 350 plants. The success of the project encouraged Reddy to take it to other states. He found a helping hand in Manpreet Singh Badal, Punjab's finance minister, who promptly took him to his constituency, Giddarbah, a cotton-producing area where huge quantities of pesticides are used. "We saw a large number of deaths and cancer cases in the area and couldn't figure out why," says Badal. "We were looking for a cheap and sustainable solution. The model presented by Naandi was just that."

For Naandi, though, Giddarbah presented a different challenge. WaterHealth's ultraviolet technology only killed pathogens, and could do nothing about pesticides and fertilisers. "This is when Tata Projects offered a new plant for just $20,000," says Reddy. The plant could eliminate chemicals as well as pathogens.

Naandi started a pilot in Giddarbah in 2007, where it set up 60 plants within 90 days, making it the first constituency in India where every household has access to drinking water as per World Health Organization norms, claims Kumar. The results, according to Badal, have been phenomenal: "Doctors say that incidences of diarrhoea, hepatitis and joint pain have come down by over 90 per cent." Like in Andhra Pradesh, Naandi charged villagers Re 1 for 10 litres of water. "This allows us to cover maintenance costs," says Kumar.

The project proved economically viable. And the state government also stepped in to finance the plans. Soon, the scheme was taken to other constituencies. In the small village of Kauni, 12 km outside the town of Bathinda, Rajinder Singh, the plant operator, hands out a notebook listing the names of 720 registered households. Villagers buy a card for Rs 60 and then come every day to collect water in 20-litre containers, cash of which is priced at Rs 130. "BPL (below poverty line) families get the container for free," says Sandeep Kumar, Naandi's regional head.

A few kilometres away, in the smaller village of Mallan, 53-year-old former sarpanch Manjeet Singh holds forth. "Earlier, the water tasted bad and gave the family stomach pain," he says. "We didn't have any other option." Sitting on a charpoy in his shaded courtyard, the burly Sikh — a well-to-do farmer — clarifies that it had nothing to do with pesticides. Singh may have his reasons for defending the use of pesticides, but it is certain that Naandi's plant has helped. Singh's wife, Surinder Kaur, who used to suffer from constant joint pain, says the family used to pay far more to the doctor every month than what it pays now for the purified water.

The Long Haul Ahead
Many more plants are underway in Punjab, with Naandi bagging a fresh order for 103 units recently. A few months ago, the Haryana government also agreed to finance the plants.

Today, Punjab and Haryana have 300 and 50 water plants, respectively. Naandi has also set up 20 plants in Rajasthan, with another 20 plants planned in Karnataka, although the state  governments have not joined the effort so far.

With Tata Projects unwilling to service the plants they sell, according to Kumar, Naandi has now roped in Vadodara-based Permionics and a Norway-headquartered firm, Malte Winje. It continues to acquire plants from Tata, too, and service them on its own steam. Reddy is hopeful of covering 2,000 villages within 12 months and, in another 11 years, the rest of India. "That will not be good for (the pharma) business, though; antibiotic sales have already come down in Andhra Pradesh," he says, with a hearty laugh. Given that India has more than 638,000 villages, even if he covers half of these in 11 years, he will bring priceless smiles to millions of India's villagers.