Down In The Dumps 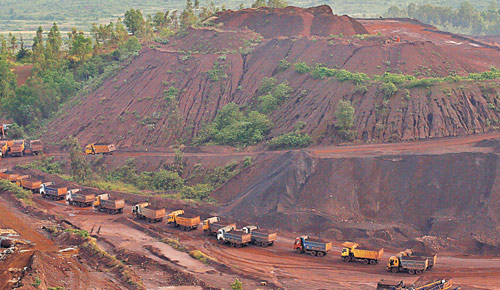 08 November, 2014
Print this article Font size -16+
The  Karnataka iron and steel industry is in a quagmire. On 23 November, the Karnataka Iron and Steel Manufacturers Association (KISMA) held a press conference highlighting the “dire situation” caused due to the shortage of iron ore. Their complaints revolved around three issues — low production and evacuation by state-owned NMDC, the largest iron ore producer, high iron ore prices in the region and the delay in mining resumption.
Karnataka was embroiled in an illegal iron ore mining scandal in 2011. In July last year, the Supreme Court (SC) put a ban on iron ore mining in the state. It allowed only NMDC to mine 12 million tonnes per annum (mtpa) and auction 1.5 mt each month to meet the needs of domestic plants dependent on the state’s iron ore.
About 36 category A and B mines can now resume mining subject to certain conditions and necessary clearances. But, KISMA says, two of the three integrated steel plants in the state are operating at just 40 per cent capacity, pig iron and alloy steel plants are operating at 21 per cent, pellet plants at 63 per cent and sponge iron manufacturers at 27 per cent. Of the eight pellet plants in the region, five are shut; 28 sponge iron producers have also shut shop, and around 15,000 jobs have been directly hit.
KISMA accuses NMDC of consistently missing targets. Since October 2011, it has produced, on average, only 550,000 tonnes a month, says Seshagiri Rao, group CFO and joint MD at JSW Steel, which is operating at 70 per cent capacity but is unsure how long it can sustain this way.
NMDC, however, has refuted the allegations. In an emailed reply to BW’s queries, it said that it had reduced iron ore prices by 2-11 per cent in October and again by 3-12 per cent during November. It also said that more than 50 per cent of the iron ore lumps put up in November’s auction had been sold, as opposed to the 10 per cent alleged by KISMA. NMDC said that all of the fine ore was in the process of being sold. Though, it did admit that evacuation issues had dampened production but maintained that the October figures were 5 per cent more than last year.
According to KISMA, currently only three of the 20 category A mines have started operations, and the rest are waiting for clearances and approvals. They have written to the steel ministry. Steel secretary D.R.S. Chaudhary could not be reached for comments since he was on tour. A senior official at the mines ministry says they have received 15 requests from  category A mine owners and only four for category B mines. “So who is causing the delay?” he asks.
NMDC clarified in its email that there was sufficient iron ore in the country. It pointed out that in 2011-12, production was about 170 mt while consumption was 116 mt.
With the buck being passed around, an early resolution is unlikely.