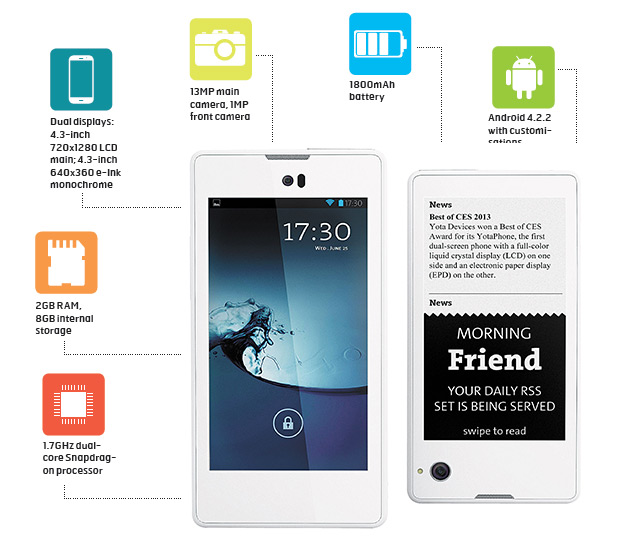 22 January, 2015
Print this article Font size -16+
The Yotaphone, no relative of Star Wars’ Yoda, is based on a really cool concept. It has two screens. Think about it: why shouldn’t we be putting the back of a phone to good use? And that’s the premise the Russian mobile broadband provider worked on when it came up with the YotaPhone. It’s been two years since the YotaPhone first made an appearance and since then, actual production and roll out has been gradual, with the company testing out markets across the globe, launching in India recently.
The second screen on the Android-based YotaPhone is an e-ink display, much like the one on Amazon’s Kindle. That means it soaks up much less battery than the main display. A lot of content can be pushed on to the e-ink screen, leaving the rest of the phone with more overall battery life. The e-ink display can stay always-on, which again has implications for what you can do with it. For example, you could have a map on it if you’re going somewhere, leaving the rest of the phone free for use. You could put a book there, turning the phone over to read any time you want to, including say when you’re commuting or waiting somewhere. Your social media feeds could go on the e-ink side, really saving you battery power and being easily accessible at the same time. You could use the second display for reading news feeds. Your notifications could go on the back as well making them visible without having to do anything. The possibilities are endless and all that’s needed is the apps that will make these uses happen. And some of them are there on the YotaPhone already. The problem is that the second generation of this device is already in existence and being showcased in the US and elsewhere and there are clearly many improvements and applications over the first- gen device which is selling on Flipkart for Rs 23,499, a bit of a hefty price for a product that is mid-range other than its dual display and that still needs much development. Anyone interested in the two-screen concept would probably want to wait for the second-gen Yota to come into the market.
While the original Yota is not really about specs, there are many usability issues, with both hardware and software, that come in the way of quick smooth functioning. Let’s take the power button to begin with, for example. Sitting in one tiny corner on the top, it takes a specific hard press in a certain position to wake the phone up. Other than volume, there are no other buttons and the phone uses a touch area under the screen for the back display that is very slow to respond. It takes a number of determined swipes for it to do anything, again because of a specific movement being required. On top of that, the specs belong to 2012 and will not satisfy that large chunk of the young early-adopter audience that likes to max out on hardware. There needs to be easier, more intuitive use, a greater number of apps for the e-ink screen, and a lower price if it’s to compete with the low-cost powerhouses flooding the market today.
All the same, the basic idea is compelling and one hopes the company will continue to develop what is really a unique phone.
(This story was published in BW | Businessworld Issue Dated 09-02-2015)
Tags assigned to this article:
mala bhargava magazine gadgets gadgets and gizmos yotaphone magazine 09 february 2015 htc re