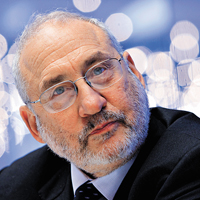 The dark clouds over Europe may get darker. Nobel laureate Joseph Stiglitz has said the European economy faces the risk of sliding back into a recession as governments rush to cut spending. "Cutting back willy-nilly on high-return investments just to make the picture of the deficit look better is really foolish," Stiglitz told Dublin-based RTE Radio. Euro countries stepped up efforts to cut their deficits to below the European Union limit of 3 per cent of GDP after the Greek crisis eroded investor confidence in the region.

Citing concerns that an excessive government support to the banking sector will inflate the budget deficit, S&P's has cut Ireland's long-term rating by one notch to AA- with a negative outlook. The rating agency raised its estimate for recapitalisation of the banking system to €50 billion from a previous estimate of €35 billion.

Dell Launches $100 Smartphone In The US

Dell has launched an Android smartphone called the Aero in the US. The touchscreen phone will sell for $99.99 with a two-year contract from AT&T, or $299.99 without the contract. Aero will support Flash software, something that the iPhone does not.

Dell has raised its bid for high-end data storage company 3PAR to $1.6 billion, or $24.30 a share, overtaking HP's $24 a share bid. Earlier, 3PAR had said it would start merger talks with HP after HP's offer trumped a $1.15-billion bid by Dell. Analysts expect HP to raise its offer again.

Is The Massive Traffic Jam In China Over Or Not?

Though some reports suggest the massive traffic jam in China's Expressway 110 (inner Mongolia to Beijing) is over, Chinese authorities have said that the now 16-day long jam could last three more weeks due to road repair work. Traffic has been building on the highway since the opening of several Mongolian coal mines, vital for China's economy.

BHP Billiton's good first half result has fuelled expectations that the company will raise its bid for Potash Corp, the world's largest fertiliser producer. Its net profit for January-June rose to $6.77 billion from $4.59 billion a year earlier. "The shareholders own the company. It's my job to create more value, not to do any one thing at any cost," BHP's CEO Marius Kloppers said.