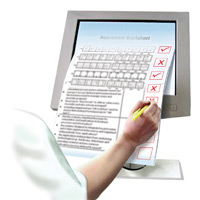 Six top state government officials in Karnataka were arrested in September for their involvement in the leakage of question papers of a departmental test. In June, there were rumours that the pre-medical entrance test paper of the All India Institute of Medical Sciences (AIIMS) had been leaked. In May, the combined law admission test for entry to India's 11 premier law universities had to be postponed after reports that test papers had leaked out. Every year, thousands of students see their intense preparations for make-or-break examinations held hostage to cheating and corruption.

To overcome this, many organisations are switching over from pen and paper to computer-based testing (CBT). According to a CLSA Asia Pacific Markets 2008 report on the education sector, the market for CBT, valued at $150 million (Rs 735 crore), is expected to grow to $750 million (Rs 3,675 crore) by 2012 in India.

As awareness levels grow, a rising number of service providers are entering the field — from established players such as Bangalore-based firm Eduquity, Aptech's Attest and MeritTrac to new giants such as Pearson Vue and Prometric. "Keeping everything tamper-proof and safe is the most important component of testing," says Uday Kulkarni, executive vice-president of Aptech and national head of the company's testing arm, Attest.

At present, only a small percentage of combined entrance tests after senior secondary are computer-based, but the numbers are set to go up massively with the government's increased focus on information and communication technology (ICT) for schools, and its plans to convert part of the school examination system to CBT. The Central Board of Secondary Education is also working on introducing virtual testing at the Class X level, where board examinations were recently replaced with an optional, on-demand testing system. In time and with the right pricing, it is expected that all small, skill-based tests, such as the driving test, can also be converted into the CBT format.

Moreover, while certification programmes of IT majors such as Microsoft, Oracle and Cisco have always followed the CBT format, now, recruitment agencies such as MeritTrac use them to judge the competence of potential employees. HR departments of companies administer CBTs, which can often be taken from home, as the first level of filtration for inter-departmental promotions.

It is true that CBTs cost nearly thrice as much as a pen and paper test, but they come with greater potential for scaling and the eventual reduction of the price tag. "The initial investment needed for this is high, but over a period it pays off," says G. Raghurama, deputy director for academics at the Birla Institute of Technology and Science (BITS), Pilani, which adopted a computer-based entrance examination system of admission in 2005.

Other Benefits
The first pan-Indian examination to join the CBT bandwagon this year will be the Combined Admission Test (CAT) conducted by the seven IIMs. "With the number of students taking CAT increasing every year, the one-day, single-sitting format was putting a lot of pressure on the system," says Satyesh Deodhar, in-charge of admissions at IIM-Ahmedabad, and coordinator of the entire CBT exercise for CAT. Under the new system, there is a 10-day testing window for the examinations starting from 23 November and ending on 7 December. "Although there is no provision now to reschedule the test within a given window in case one misses it on a particular day, in due course, it will be built into the system," Deodhar says.

Administered in air-conditioned rooms, CBTs also ensure a better environment for the examinee. "The uneven and unstable desks during the examination, which had to be continually shifted and adjusted, were very distracting, especially in a high-pressure exam such as CAT," says Ankita Sehgal, an MBA student from Amity International who took CAT in 2008.

Apart from plugging leakages, CBT allows highly specialised checks of examinees to prevent the same individual from taking a particular test more than the prescribed number of times, and also prevents proxies. For Graduate Management Admission Test (GMAT) — conducted by the UK-based testing giant Pearson Vue at a date and time chosen by the examinee throughout the year — candidates are identified through a palm vein scan, and the result is immediately available. Madan Padaki, CEO of MeritTrac, which conducted online entrance examination  for Gujarat Technical University in July this year — a first for a state government — and which also started the online format for Manipal Institute, has an E3 philosophy on CBTs. According to him, "They provide ease of administration, enhanced candidate experience and excellence in execution."

Pearson's new test of English language, along the lines of IELTS (International English Language Testing System) and TOEFL (Test Of English as a Foreign Language), is also in CBT format. "There are two million takers for academic English tests throughout the world," says Joseph Rospars, Pearson's Greece-based vice-president for Europe, Middle-East, Asia and India. "In India, this number is 50,000-300,000." Online format of such examination reduces the time lag in sending the scores to universities abroad, where admissions depend on proficiency in the language.

Above all, "CBT provides the ability to adapt tests to individual students, so that the level of difficulty can be adjusted as the student progresses through the assessment," writes Robert Kozma, a member of the Intel, Microsoft and Cisco taskforce on education in a report for the European Union on CBT.

"Test engines are able to determine the ability of examinees," explains Sarvesh Srivastava, managing director-Asia Pacific at Pearson Vue, the electronic testing arm of Pearson. "The computer starts giving easier questions if it figures out that tough ones are being skipped." This system allows an examinee to have a continuous scale of measurement, from 0-100 for instance, instead of a discreet scale of A,B,C,D or E.

Cautious But Optimistic
The All India Management Association, which conducts the Management Aptitude Test (MAT) for admission to B-schools in tier-II and tier-III cities, provided the CBT option to candidates for the first time in September. Out of 30,000 examinees, 10 per cent opted for the virtual format. "We have decided to shift to the CBT format gradually rather than at one go since the benefits of technology are yet to percolate to the grassroot level," says Rekha Sethi, director-general of the association.

The possibility of technology glitches makes many others stick to the traditional pen and paper-based model of testing. Also, where the number of examinees is small, it makes sense to keep things simple. The UK-based Law School Admission Council (LSAC), for instance, which has recently introduced its LSAT examination in India, administered by Pearson Vue, uses a physical format. Daniel O. Berstine, president of LSAC, who was in India recently, said the pen and paper test has its own advantages, with simpler logistics, when the numbers are small.

In situations where subjective assessment is essential, as in the case of school children, testing will remain a combination of the physical and CBT formats. With faster broadband connectivity becoming commonplace, eventually all first-level tests will be held through secure, dedicated lease-lines on the internet, or under the gaze of web cameras at home, with security features such as fingertip or iris recognition, and audio recording to detect whispering and prompting and so forth.

"Professional examinations are high-stake affairs where people are willing to do anything to break the system," agrees R. Dhirendra, CEO of Eduquity, which conducts CBTs for BITS-Pilani, and is one of the earliest entrants in the field. "This is where the proctored environment offered by a virtual set-up becomes effective."

shalini at sharma at abp dot in