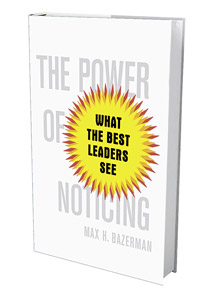 14 January, 2015
Print this article Font size -16+
An interesting name for a book that begins very well, right from the preface, which shares personal experiences and then goes across to cover areas such as school, college, church, auction, gambling, financial institutions, a bit of government, security, the entire nine yards.
What emerges in Maz Bazerman’s The Power of Noticing is common queries and pointers that question the facts as an outsider has noticed and some suggestions with examples of how it could/should have been addressed.
A particular example of what an audit firm should and should not do is quite relevant, given the fact that by extending to everything, the firm lays itself open and unable to deliver an independent audit.
In his book, Bazerman, a professor of Business Administration at Harvard Business School, brings about common facts at different levels and categories, where some examples of how it does not affect me, leads to implicit blindness (which I am sure even in family and friends surroundings, we end up practicing). How there are practices, that the industry implicit blindness leads to a continuation of bad practices till the bubble bursts.
Whether in personal or professional life, who does not notice conflict of interests — most businesses end up doing it, however practically everyone ends up turning a blind eye, here the example of Satyam has been referred to; but stopping or stepping away from recognising the conflict or calling it out is difficult and few manage to do it.
Except for Satyam, most examples are from the companies in the US, where the financial irregularities have been the focus and the author asks questions of what could have been controlled or should have been checked by the leaders.
I would have liked some examples or cases where the best leaders had noticed and guided their organisations better. But then it would not have fitted in the examples used.
I have had the pleasure of working and learning with some good leaders during my career, who had immense power of noticing things — asking for more data, information, access — than was presented to them in a normal way, which helped them in making better and informed choices. But, there are many variables, circumstances (not that I condone the ethics part) where in spite of being aware, noticing, one ends up turning a bit of blind eye. And sometimes it comes back to bite you, when you realise that ‘Hindsight is 20/20’.
The book would be a good read, may be twice over the first time to get through and understand what the author is referring to and then mapping some of one’s personal examples and how they could be addressed differently by noticing the variables that had not been considered.
Anaggh is Co-founder,  1+99, a customer experience design consultancy
(This story was published in BW | Businessworld Issue Dated 26-01-2015)
Tags assigned to this article:
magazine books bwbooks 7 bwbooks7 anaggh desai magazine 26 january 2015 the power of noticing maz bazerman