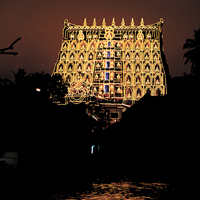 break-page-break
But it is difficult to value the treasure as some of it dates back to even 10th century. "It will require in-depth study to know the antiquity of the finds. Expert preservation techniques are needed to maintain them," says C.V. Anandabose, director general and vice-chancellor of the National Museum and University in New Delhi.

According to experts working with the Victoria Coins and Curios in Kochi, a 150-year-old, 8-gram rare Travancore gold coin is currently valued at more than Rs 1.5 lakh. The coins found so far at the temple weigh over 532 kg!

Regarding the treasure's public display, Anandabose says: "In the case of (the Hyderabad) Nizam's jewellery, a special Act was enacted. It is kept in the custody of the Reserve Bank of India and only a part of it is displayed occasionally at the galleries in Hyderabad and National Museum."

Roots Of Metals And StonesThe kingdom of Travancore dates back to the ancient Chera kings, who ruled Kerala with the title Kulasekhara Perumals for at least 10 centuries. With the motto of Dharmatha Kuladaivatham (Dharma is my family deity), the kings instituted high standards of governance.

The kings kept the state treasury separate from the temple treasury. Cash or gold taken from the temple treasury on rare occasions was returned promptly with proper documentation. Experts note that the royal family had kept secret documents on the inventory of most of the cellars, which were later codified as ‘Mathilakam Records' in the early 20th century by renowned Kerala poet Ulloor S. Parameswara Iyer.

The royal family also inherited considerable wealth from the last king Sree Chithirathirunal Bala Rama Varma. They also own many assets such as the export house Aspinwall Company in Kochi through various trusts.

The kings had large earnings from trade of spices with Europeans, especially black pepper known as ‘black gold', and much of this wealth was dedicated to Lord Padmanabhaswamy. Another source of revenue was offerings from defeated kings and from visitors. For example, in the 18th century, the defeated Kayamkulam king had to pay a sum of Rs 1,000 and an elephant to the temple. Then, the Travancore kings were mandated to conduct at least one Thulapurushadanam or Thulabharam — a sacred offering of  gold or precious items equal to one's weight — to Lord Padmanabhaswamy as part of coronation rituals.

Others In Line
Like the Sree Padmanabhaswamy temple, many other temples were run by royal families. These include the Puri Jagannath temple in Orissa, the Somnath temple at Veraval, Madurai Meenakshi, Kashi Viswanatha, Ujjain, Ekalingadi in Rajasthan, Kamakhya in Assam and the Bhimakali in Himachal Pradesh.Historically, many of these ancient temples stashed huge quantities of wealth and were a prime target for invaders. The ancient Somnath temple was plundered several times by emperors such as the Mahmud of Ghazni, Alauddin Khilji and Aurangzeb.

At present, the ancient Tirupathi Venkatachalapathi temple at Thirumala in Andhra Pradesh is estimated to have assets worth over   Rs 52,000 crore including a reserve of over five tonnes of gold and Rs 560 crore in fixed deposits. The annual revenue of the temple is estimated to be Rs 650 crore. Unofficial reports say the Shirdi Saibaba Temple at Shirdi in Maharashtra, run by the Shirdi Sai Trust, is estimated to receive Rs 350 crore worth donations every year; and the Shree Siddhivinayak Ganapati Temple in Mumbai gets donations worth more than Rs 50 crore every year. Puttaparthi Satya Sai Baba's religious empire is unofficially valued at $9 billion (Rs 40,000 crore). The Sabarimala Ayyappa temple in Kerala reported revenue of Rs 131 crore in 2010-11.

The focal point now, though, is Chamber B.