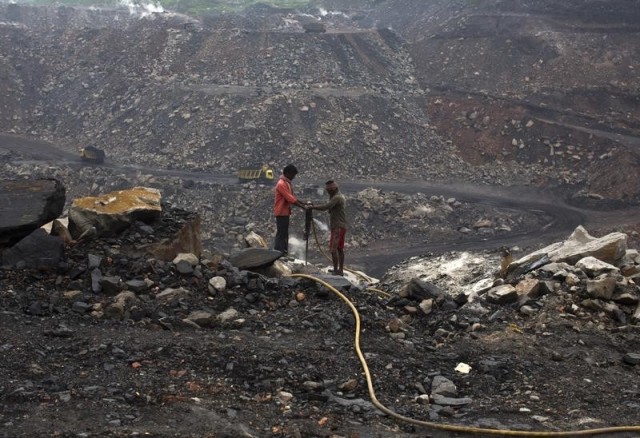 02 December, 2014
Print this article Font size -16+
A rift between the five powerful labour unions at Coal India Ltd is set to clear the way for Prime Minister Narendra Modi's government to complete a stake sale in the state company that is critical to hitting budget targets.
One of the unions, close to Modi's Bharatiya Janata Party (BJP), says it has the backing of half of Coal India's 370,000 workers and will not join a strike on Monday to oppose plans to sell 10 percent of the firm and let private firms to mine and sell coal.
"A strike is not the right process to get your demands met," Baij Nath Rai, president of the Bharatiya Mazdoor Sangh (BMS) trade union, told Reuters.
The sale could fetch a third of the government's $9.5 billion annual divestment target. Asset sales are running behind schedule, pressuring a deficit target of 4.1 percent of GDP for the fiscal year to March.
Officials have marketed the sale in the United States and roadshows will follow this week in London and Singapore. But no date has been set for the actual launch of the sale, sources with knowledge of the matter said.
The Coal India offering would follow a 5 percent stake sale in state-controlled Oil and Natural Gas Corp, worth $2.8 billion and slated for December.
Second Time Lucky
Last year the unions thwarted the previous government's attempt to sell a stake. Officials are now counting on Modi's clout to push the sale through as part of broader efforts to end India's coal production crisis.
The unions rarely break ranks. With the BMS staying away, union leaders and company officials told Reuters the one-day strike is likely to have little impact on Coal India's daily output of up to 1.5 million tonnes.
The BMS is part of the same Hindu nationalist umbrella group to which Modi's ruling Bharatiya Janata Party belongs.
"The divestment will go through soon and worker unions will come on board. Coal India officials are in talks with them," said a senior government official.
But the official, who declined to be named before an official announcement, said the government did not believe in "steamrolling" anyone and was working on other ways to make the strike fail. He did not elaborate.
A senior Coal India official said the BJP's election victory in May had boosted the BMS's influence over other unions, helping stem opposition to government measures and curb output losses.
"We don't want to quarrel with the BMS but their leadership is under pressure," said Jibon Roy, general secretary of the All India Coal Workers Federation.
"We oppose divestment, we oppose commercial mining by private firms, and we oppose anything that will lead to the demise of Coal India and bring slavery to India".
(Reuters)
Tags assigned to this article:
news 6 bjp narendra modi coal india coal coalgate all india coal workers federation baij nath rai bharatiya mazdoor sangh jibon roy