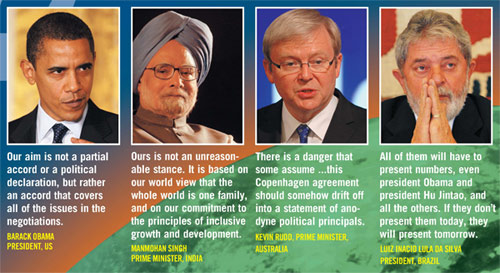 We don't have to destroy the economy to save the environment." This commandment from Ben Nelson, the US Senator from Nebraska, sums up the fate of the Copenhagen Climate Summit fairly accurately. Nobody wants to save the Earth from getting overheated by remaining under-developed.

So, it is no surprise that the 15th conference of parties (CoP) to the United Nations Framework Convention for Climate Change (UNFCCC) is not going to yield a global treaty on climate change adaptation and mitigation. Instead, there may only be a declaration of political intent to keep working towards a treaty that will provide continuity from the Kyoto Protocol beyond 2012, or even replace it.

Not even with the late offers from the US and China. The US is now willing to offer 17 per cent emission cut from the 2005 level by 2020, and China has offered to cut the emission-intensity of its GDP growth by 45-50 per cent 2020.

According to Navroz Dubash, senior fellow at Centre for Policy Research, Kyoto Protocol enshrines the principle of comparability of action across the developed countries, along with the principle of common but differentiated responsibility between the developed and developing countries. Since the US, the biggest contributor to global warming — and the second-largest polluter until China overtook it recently — has not ratified Kyoto, other developed countries want out too. They also want a new common agreement for all on the basis that their actions should be comparable to those of the US. "This tension between differentiation and comparability is at the heart of the deadlock," says Dubash.

Due to the US aversion to Kyoto, UNFCCC negotiations for global cooperation are being conducted on two tracks: one has the 184 signatories of the protocol, and the other has 194 countries, including those who have not ratified it yet. Besides, the treaty cannot be signed because of the irreconcilable differences between developed and developing countries over who should do how much to save the environment.

The developed countries, on average, want to cut their carbon dioxide emission by 20 per cent from the 1990 levels by 2020 instead of 40 per cent as developing nations want. They also want commitments on emission cuts from fast-industrialising India and China. The developing world wants a free flow of clean technologies and funds from historic polluters, in addition to commitments on higher emission cuts. India and China are willing to do a lot on their own, but without the world keeping tabs on them.

"Some parties say international verification should be done even for those measures we take with our own money. That is not acceptable," says Ajay Mathur, one of India's negotiators and the director general of Bureau of Energy Efficiency. But, he says, India will be able to cut its carbon emission by 10 per cent through energy efficiency measures alone.

Clearly, even the dire prediction of Earth becoming uninhabitable in a hundred years is not getting the world together. Now, it is up to cold economics to save the world. It is reasonable to expect India and China, or any other country, to reduce their usage of oil and coal and switch to clean energy, not so much to save the planet but more because they need sustainable supply of low-cost energy. World's known oil reserves are depleting at 6.7 per cent a year, says International Energy Agency (IEA). Coal's intensive pollution will require increasing investment in processing and emission containment.

So these countries would invest in the development and spread of clean energy to grow their economies, irrespective of a global treaty on climate change. They will also do so to improve the quality of life at home and avoid getting penalised with emission taxes and bans by their more environment-driven trade partners. "There is a danger that there will be demand for levelling of the playing field and action against what is called environmental dumping," said Nicholas Stern of London School of Economics at India Economic Summit (IES) earlier in November 2009.

Already, the US Climate Change Bill has provisions for protecting its industry from foreign competitors who do not adopt an emission cap-and-trade regime. This Bill has been passed by the US House of Representatives but is yet to be approved by the Senate, which is the reason why the US cannot sign a treaty in Copenhagen even if it wants to. Moreover, developed countries could try to obstruct the flow of clean technologies to the developing world to give a competitive edge to their own firms. So, it is economically smart for India to join the dominant trend in the global economy — the world is looking to go green.

In a way, the failure at Copenhagen is more of a reality check than a disaster. The outcome of Kyoto Protocol is not very encouraging either. "Even the easiest possible target of reducing greenhouse gases (GHG) emission by 5.2 per cent by 2012 from the 1990 level by the 37 Annex 1 countries of the Kyoto Protocol has not been achieved. In fact, their emission has only gone up," says Shirish Sinha, head of the climate change and energy program, World Wildlife Fund (WWF), a global green organisation.

Still, it is tough on those who have worked hard to get the world together behind the cause of climate change adaptation and mitigation. According to R.K. Pachauri, chairman of the UN Intergovernmental Panel on Climate Change (IPCC), unless the developed countries commit specific emission cuts and funding of developing countries for climate change mitigation and adaptation, the Copenhagen meet will be meaningless. Moreover, the experience of WTO negotiations suggests that postponing an agreement to accommodate more negotiations could yield more postponements. WTO's Doha development round has dragged on for eight years now.

The Renewable Future
However, it is not all gloom for the Copenhagen summit. Host Denmark is trying to put together a strong cast of global leaders at the summit to make a categorical political statement in support of a legally-binding global agreement even if it takes longer to iron out the differences. If the Danes have their way, the star cast at Copenhagen will include US president Barack Obama, Chinese president Hu Jintao and Prime Minister Manmohan Singh. Prominent European leaders have already thrown their weight behind the summit, including Germany's chancellor Angela Merkel, UK prime minister Gordon Brown and France's president Nicolas Sarkozy.

Importantly, there could be a discernible change in India's approach to Copenhagen in the coming days. "Expect some specific assurances if not commitments coming out of the Indian government," says Sinha. Still, it remains that the climate parleys are running into a logjam of conflicting self-interests quite like the international trade negotiations. So, it is no surprise that key countries and groupings are trying to work out bilateral arrangements for cooperation in climate change mitigation, particularly in the area of development and sharing of clean technologies. In the past month, India signed an agreement with China, the EU with Brazil, and China with the US. Sinha expects a proliferation of bilateral climate agreements. "However," he says, "for the bilateral efforts to succeed, there needs to be a framework set by the UNFCCC."

While the governments haggle, private initiative could turn out to be a potent factor in stemming climate deterioration, according to Stern. "A clear agreement at Copenhagen will unleash the private sector forces," he said at IES. Speaking from the same platform, solar power entrepreneur, Deepak Puri of Moser Baer, said that clean technology was a trillion-dollar baby for business. Moser Baer set up the world's first thin-film photo-voltaic plant in India earlier this year, with an initial capacity of 80 MW modules. Investments in India in solar energy are expected to get a big boost from the government's mission to have a solar energy capacity of 20 GW by 2020.

In short, it would be safer to bet on the nations' economic self-interests and the private profit motive to save the Earth than on any amount of international altruism.