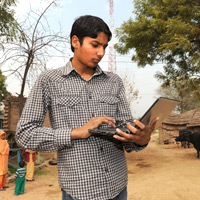 08 June, 2015
Print this article Font size -16+
The Indian school students are rapidly adopting and adapting to a Digital lifestyle to succeed in a global economy where the default is Digital says a survey conducted by Tata Consultancy Services, called the TCS GenY Study 2014-15.
This recent study has been done across 14 major cities of India like Delhi, Chennai, Kolkata and Mumbai, it revealed the fact that today school going students are leading a gadget-rich lifestyle and they are heavily dependent on Internet and highly active on various social media platforms available to keep them up to date with the world and current affairs and it is prevalent in both boys and girls.
Ajoy Mukherjee, EVP & Head of Global HR said, “The need to be constantly aware, always connected and make informed choices is in the basic DNA of the post-millennial students. The TCS GenY Survey findings provide us with essential information to prepare ourselves to provide them with exciting career opportunities.”
Although, today’s youngsters still consider face-to-face communication as the most preferred way of communicating with friends (36 percent), though 46 per cent of the respondents said they digitally stayed in touch using video chat.
WhatsApp is the most popular instant messaging platform (58 per cent) followed by SMS (20 perent). PC and laptops are the most popular mode of accessing the internet (55 per cent), followed by smart phones (30 per cent).
It also revealed the fact that 72 per cent respondent own smart phones and half of them have internet access. Most of them said that social media helps in getting in touch with family and friends and they keep a tab on current events. About 76 percent of the respondents spent at least one hour daily on internet.
Online shopping has also seen a rise among the students using internet in buying gadgets and electronics mainly. And majority of them also mentioned that their parents monitor their online content.
Over 12,365 high school students across 14 Indian cities participated in this survey.
Tags assigned to this article:
news 7 digital haider ali khan tcs survey tcs geny study 2014-15