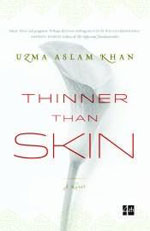 08 November, 2014
Print this article Font size -16+
Thinner Than Skin is three very different sets of people who are inextricably linked together. Nadir Sheikh, a “Moozlim”  and his best friend, Irfan set off to Kaghan valley accompanying Farhana (Nadir’s lover) and her colleague Wes to study glaciers. There they meet Maryam, Suleiman and their six-year-old daughter Kiran, Gujjars camped by the Lake Saiful Maluk. Irfan is familiar to the tribe so they are offered hospitality. While partaking of it Kiran asks for a ride in their boat and Farhana agrees readily. Farhana persuades Suleiman to send his daughter with them much to the discomfort of Irfan since she is a guest and a woman, making it impossible for the hosts to refuse her request. The boat ride ends in tragedy with Kiran drowning. The death has repercussions on everyone — Nadir and Farhana drift apart, Irfan becomes irritable and restless and Maryam retreats into a shell and returns to her “pagan” rituals for solace.


Most of the story unfolds in the Kaghan valley, in the shadow of Nanga Parbat — the killer mountain and in the Lake Saiful Malduk, which too has a sad tale of unrequited love and death associated with it. Apart from the Gujjars and the Americans there is Ghafoor, trader, among other things, leather for jade and a childhood friend of Maryam. He promises to avenge Kiran’s death.

The story is set predominantly in Kaghan Valley, North-West Frontier Province at the heart of significant trade routes. Ghafoor who is familiar with Balakot, Gilgit and Kashgar has “watched more currency exchange more hands in more tongues”.  With trade there are socio-political changes in the region. Suleiman would say to Maryam “he was a good husband. ‘You are lucky I am not like the others.’ He was right. He did not interfere with her rituals in the shrine, even in recent years, as the pressure to tether her more securely to the Islam spreading towards them increased. He left her to keep the old calendar in place of the Islamic one. They called it Moharram, she could still say Chaitar; they called it Ramzan, she continued to mark the date of their departure in the highlands by Nauroz and their return to the lowlands by Het. “Pagan seasons for a pagan wife,” the others said, but he ignored them, in his calm, dignified way.” (p.216-7)

But this was in Balakot where “two years after the 1991 floods, Maulana Sufi first began imposing Islamic laws in the region. Now, many summers later, his followers were moving deeper into the forest, their camps creeping like mould. Maryam could turn her back to him all she pleased, but every herder knew that no agency really wanted to dismantle the camps. Why would they? It was thanks to them that they could keep up the fight in Kashmir and Afghanistan …” (p.246) It shows the sinister rise of Islamic fundamentalism and the indoctrination of children to co-opt them as soldiers. The Gujjars who have “no land, no nation” are caught in this terrible fight between the different forces of State and terrorists.

This is a novel that weaves together the co-existence of folklore, “pagan” rituals and the grim reality of a war for socio-economic reasons. Along with documenting the mating of glacier rituals that should only be witnessed by locals for fear of bad luck there are constant reminders of other evil omens like the owls that keep appearing in the story. Except for Maryam, everyone else considers the sighting of an owl as ill-luck.

In exquisite prose Pakistani author Uzma Aslam Khan describes the landscapes, the emotions and the experiences of the people in the region. For instance, Maryam who does not have an easy life and yet bears it with fortitude explains to her daughter Kiran how to survive as a woman. “In later years, [Kiran] would ask Maryam if her skin was as thin as a goat’s. And Maryam would tell her the truth. It was thinner. Which meant, of course, that if a goat could be shred that easily, so could a woman. …She would also tell Kiran that, like herself, she would have to grow a second skin to protect the thin one that was eventually left to the sun and the earth, the wind and the flies. This second skin lay beneath the frailer one, not on top. It had to be kept hidden in order to work.” (p.124) Thinner Than skin is a superbly crafted novel impossible to put down till the last page has been read.

Jaya Bhattacharji Rose is a publishing consultant and columnist.