Diesel Price Hike May Push Up Inflation In Short Run 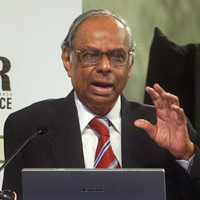 08 November, 2014
Print this article Font size -16+
The hike in diesel price may push up inflation in the short run but the government's move is expected to help contain fiscal deficit, leading to gains in the long run, Prime Minister's Economic Advisory Council Chairman C Rangarajan said in New Delhi on 21 September.

He also sought to allay apprehensions over the government move to allow FDI in multi-brand retail, saying that kirana stores can become part of modern retail by organising themselves and getting assimilated into the organised sector.

"The immediate impact of increase in any administered price like this will push the price index up. But we need to look at from long term point of view.

"We also need to look at from the angle that in the absence of such a measure fiscal deficit would have been higher," Rangarajan said in a press conference.

The government had recently increased the price of diesel by Rs 5 a litre and capped the use of subsidised LPG cylinder to six in a year per family, evoking sharp protests all over the country.

"Immediately, it can produce raise in the price index but over the year I think over the medium term it is the best thing to do," Rangarajan added.

On the government decision to allow FDI into multi-brand retail, he said it will create an opportunity to improve infrastructural facilities in the agricultural marketing field which may ultimately lead to price reduction.

"The present marketing arrangements are not on sound lines. Therefore, induction of organised retail, more particularly foreign investments in to retail, can lead to an improvement of the marketing system and therefore will lead into some sense of softening of prices," he added.

To a query, Rangarajan said that some of the foreign entities which are currently invested in the wholesale business may show interest in investing retail also.

He added, however, that it will take some months before they take decision on investing in the retail business.

Allying fears that FDI in retail will have negative effect on small retailers, Rangarajan said the international experience shows that even in advanced countries where there are large scales department stores operating, the 'Mom and Pop stores' (neighbourhood retailer) continue to exist.

Earlier, in an address to the Centre for Economic and Social Studies, he said that once the share of overall modern retail in food reaches about 25 to 30 per cent, it is bound to affect the kirana traders first and then the small and marginal traders.

"These kirana stores and street hawkers can also become part of the modern retail change story if they can be assimilated into organised retail, organise themselves under their banner through franchisees, upgrade through infusion of capital, better training etc.," Rangarajan advised.

The traditional system and modern retail chains are complementary to each other and their co-existence is important for each other's functioning while providing options to producers and consumers, he added.