Devising ‘Made In India’ Devices 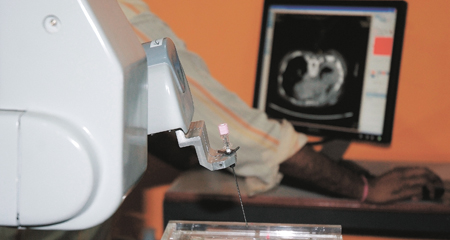 The first time he used an Indian pacemaker on a patient to help his heart beat normally was over a decade ago, recalls Suresh Vijan, consultant cardiologist at Mumbai’s Lilavati Hospital. “The experience was so disappointing that I never went back,” he says.

The words ‘India’ and ‘medical technology’ are seldom used in the same sentence. An indigenous medical devices industry has been virtually non-existent. Local players, with some exceptions, have struggled to shed the ‘low-tech, low-quality’ tag. For instance, doctors faulted local pacemakers for being too bulky and difficult to implant, with leads (that connect the pacemaker to the heart muscle) fracturing easily.
Even today, an estimated 80 per cent of India’s medical technology market comprises foreign-made products from firms such as GE Healthcare, Siemens, Philips and Roche Diagnostics. No law governed medical devices until 2005 and barnyard operators competed freely with bonafide local companies. Foreign firms with their quality tag gained an upper hand.
FILLING GAPS: V. Raja, president and CEO of GE Healthcare, says there is a big unmet demand for affordable medical devices in India (BW pic by Gireesh G.V.)
When a homegrown company embarks on a mission to change this perception, it is bound to raise eyebrows. Like MediVed, a start-up that is convincing doctors such as Vijan to change their mind. More on why Vijan recently began using MediVed’s Bangalore-made pacemaker later.
There are others. Their efforts straddle a swathe of activities — from diagnostics such as PCR machines (used to detect viral diseases) and X-rays, to implants such as pacemakers and stents (that prop up blocked arteries). Their approach is “more incremental than disruptive”, says Jayant Singh (industry analyst) at consultancy Frost & Sullivan.
They are being spurred on by rising demand for affordable healthcare not just in India but also in advanced markets facing cost pressures on healthcare budgets. A report by industry body Assocham and Yes Bank says hospitals and allied sectors such as diagnostic chains and medical insurance in India will grow 23 per cent year-on-year to $54 billion by 2012. India’s medical devices market — currently it is just one-fifth of the Rs 35,000-crore Indian pharma market — is also among the fastest growing in the world at 20 per cent-plus growth rates.
Take Bangalore-based Bigtec Labs. The founder director of the firm, Chandrasekhar Nair, is betting on a product that can revolutionise the way viral diseases such as hepatitis, malaria and H1N1 or swine flu are diagnosed. Bigtec’s microPCR is a miniaturised and portable version of the bulky PCR (polymerase chain reaction) machine. Trials suggest it will be much cheaper, faster and user-friendly. And considering the recent swine flu spread, such a device will certainly create a buzz. Besides, “the health ministry is looking for futuristic devices to provide accurate testing, that are not cumbersome to use and can even be taken to rural areas”, says Sudeep Kumar, chairman of New Millennium Indian Technology Leadership Initiative (NMITLI), a government initiative that has funded Bigtec’s product development.
Then there are companies such as Chennai’s Perfint Healthcare, which wants to make soft-tissue biopsies simpler by using robotics so that a larger universe of radiologists can attempt them. Or Skanray, a Mysore-based maker of high-frequency digital X-rays with radiation leakage control that sell at a fraction of the imported equipment’s cost, according to founder Vishwaprasad Alva.
Click here to view enlaged image
Others such as Bangalore-based MediVed are transferring technology for pacemakers from the West and customising cost and design for the Indian market. And Chennai’s Trivitron and Opto Circuits have already built some scale in trading and contract manufacturing of devices, respectively. These companies now want to position India as a manufacturing base like China — which is among the top five exporters of medical devices — and also want to build their own brand in emerging and advanced markets.
But the MNCs are not resting on their laurels either. “In the past two years, we have clearly seen that there is a yawning gap between the needs of the Indian market and what is available,” says V. Raja, president and CEO of GE Healthcare.
GE’s ‘made in India, for India’ initiative — no-frills products such as ultrasound machines and baby warmers designed and made locally for Indian and emerging markets — is a response to this. A GE baby warmer that was imported at $30,000 now sells for less than $3,000 without “bells and whistles”, says Raja. Next on its radar is a single-slice, economical CT scanner, which can replace India’s dubious refurbished business — where scanners discarded by advanced markets are touched up and resold.
For some, this presents an opportunity. “We cannot replace the big companies. But we can compliment them,” says Alva. “We see ourselves as a medical technology partner with companies who can add to our distribution capability in India and other markets,” says Dinesh Puri, CEO of MediVed.
The Challenges
One, unlike China, which encouraged manufacturing, Indian laws indirectly reward trading by charging higher duties on raw materials than on finished goods, says G.S.K. Velu, managing director (MD) of Trivitron. Second, medical technology is capital intensive, but Indian products sell in the value segment. Pune-based manufacturer of catheterisation labs (where stenting is done), Alpha X-Ray — recently acquired by Philips — is a case in point. Alpha X-Ray began making its own path labs  from scratch less than seven years ago at less than half the price of an imported one and expanded access to many districts in Maharashtra such as Latur and Ahmednagar. Yet Alpha’s promoters sold out, since it was struggling for funds, says P.V. Gopal, a co-founder. And given the market they were targeting, “value growth was not forthcoming”, he says.
Tags assigned to this article:
magazine gauri kamath healthcare ge healthcare lilavati hospital h1n1 v raja dinesh puri medived