New Delhi [India], June 13 (ANI): Former India batsman VVS Laxman on Saturday applauded all-rounder Irfan Pathan, saying the player retained the passion for cricket despite facing many barriers in his career.
As part of his initiative of paying tribute to teammates who influenced him immensely in the course of his career, Laxman shared a photo of Pathan and heaped praises on him.
"Despite grappling with his fair share of challenges, @IrfanPathan retained his fierce passion for the sport. Along the way, he embraced the role of an inspirational mentor-cum-coach when still an active first-class player, willingly sharing his wisdom and experience," Laxman tweeted. 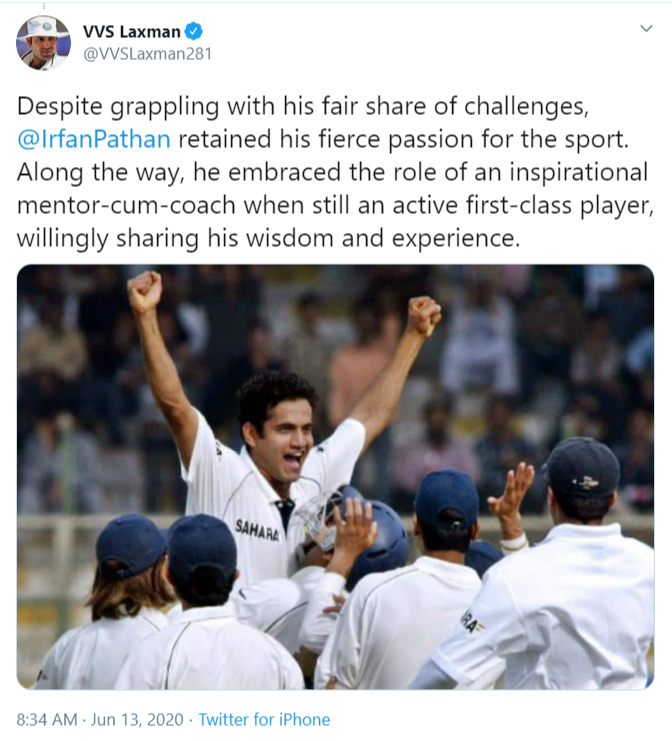 The 35-year-old was considered by many as the most lethal swing and seam bowler to emerge from India after Kapil Dev.
Pathan played a clinical role in the final of the inaugural edition of the T20 World Cup against Pakistan in 2007. He picked up three wickets and returned with the figures of 3-16 in his four overs and was named as the player of the match.
He is one of the three bowlers to have claimed a Test hat-trick for India and the first in the world to claim it in the first over of the match. In 2006, Pathan dismissed Salman Butt, Younis Khan and Mohammad Yousuf on consecutive deliveries.
The swanky left-arm pacer featured in 29 Tests, 120 ODIs, and 24 T20Is for India, bagging 301 wickets across all formats. He also managed to score 2,821 runs studded with a single hundred and 11 half-centuries.
Pathan donned the Indian jersey for the first time in Test cricket when he played against Australia at Adelaide in 2003. India won that match by four wickets and Pathan picked his maiden wicket in the game.
Pathan also played a major role in uplifting Jammu and Kashmir cricket team as he performed the role of mentor-cum-coach for the team.
The 35-year-old announced his retirement from all forms of cricket in January this year. (ANI)