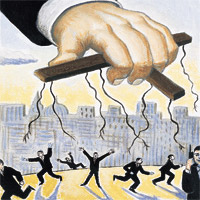 08 November, 2014
Print this article Font size -16+
The great Indian epic, the Mahabharata, is a vast saga that teaches those who want to listen, the ideals of life. It is replete with stories that propound sublime truths that are relevant across ages and across every walk of life. One such story about the great master (Acharya) Drona explains the importance of innovative training methods.

Drona made himself present to the rulers of the land through his exemplary skill and concentration. We are all familiar with the story of how he extracted a ball from a deep well using just tall wild grass that was growing around.  But what is important is what happened after he became the Acharya to the Pandava and Kaurava princes – 105 in all!

How did he train so many children with different mindsets? We must understand that his training was not only on weapons and the art of war, but on deeper subjects such as politics and 'Dharma'. He had to give them insights on people management and international relations. His was an onerous task for he was given the responsibility of making a King, generals and administrators out of them.

On day one, he assembled all princes and showed them pots of different sizes that were kept in a corner of the hut. Drona asked them to take a pot each and collect water from a stream that was running nearby. He watched them keenly in their task. Bhima picked the biggest pot, but with a small opening, and rushed to the river. Yudhistra, being very just and kind, ensured that Nakul and Sahadev picked their pots and then picked his pot. The Kaurava brothers also took the pots. Arjuna also chose a big pot.  All the princes rushed to fill water, but Arjuna returned first. His pot had a big opening, enabling him to fill water faster than the others. The master noticed his choice.

Based on this decision Drona made his plans to teach each prince. He understood that Arjuna will learn more and faster than others, just like the pot which allowed the water to flow in fast.

What do we learn from this ‘strength finding’ tale?

Identifying the strength of people and their temperament to learn is very important in competency building!

Author Marcus Buckingham talks about three levers in Managing People. They are:

Strength is an indicator of one’s inclination and interests. Mahabharata has many tales that deliver subtle insights learning.
In another story, Arjuna was once having supper after finishing his duties. While he was eating, strong gust of wind blew out the lamp in the room – and Arjuna continued eating. He knew where the plate and his mouth were. Then it struck the young prince. If he could easily eat in the dark, could he be able to shoot arrows accurately at a target in the dark? The next morning he narrated this to Drona and asked him whether he can shoot arrows in the darkness. This question shaped Arjuna as the most invincible archer of his time.

Arjuna was Drona’s favorite pupil, but he did justice to all students under him. Bhima was taught on heavy warfare – just like the pot he carried. Nakul had a liking towards animals, especially horses. He had special lessons on animal behavior. He was the best in Horse whispering. In the later years, Nakul bred quality horses for the war which was an advantage for the Pandavas. Sahadev had an eye for astronomy and he was a master in it. Drona catered to his learning style too. Yudhistra had the maximum lessons on Politics and Law because everyone knew he would be ascending the throne. Drona, an efficient teacher, catered to everyone’s learning interests and learning styles.

He designed the syllabus and courseware based on individual pursuits and learning style. This self-paced learning made a big impact. These three leverages go in building a competent person or an organization.

Have we realised our strengths, the patterns of it?

Are we watchful for the triggers for activating the strengths?

Are we catering to the learning style of people?

Once we identify the pattern, the next step is to map the solution or process in a three circle Venn diagram of Desirability, Viability and Feasibility. How many people desire that action or solution we have devised! Is the solution aligned towards a viable business outcome? By building this particular competency what do we intend to achieve? Last but not the least, is it feasible to implement the technology and scale it across the organisation?

Once the solution features in all spheres, the solution is ready to be rolled out. Tim Brown, a renowned thinker in Design Thinking speaks about the necessity of fulfilling the three requisites Desirability, Viability and Feasibility. Once it meets this three we can pat our shoulders and say it is all done!