When the annals of the 21st century are written, how will it’s greatest flag-bearer, the Internet be remembered the best? Will it be as the bridge that brought people closer, irrespective of distance? Or will it be the service that saved countless man-hours, by bringing everything from shopping to banking home (and then wasted all of it by inventing social media and Angry Birds)? Will its legacy be remembered as the repository of information that anybody could tap into, any time? All of these, without a doubt. But more importantly, the Internet will, and should be remembered as the great leveller; everybody — rich, poor, employed, student — whoever you are, you have a voice, and the power to start a revolution. 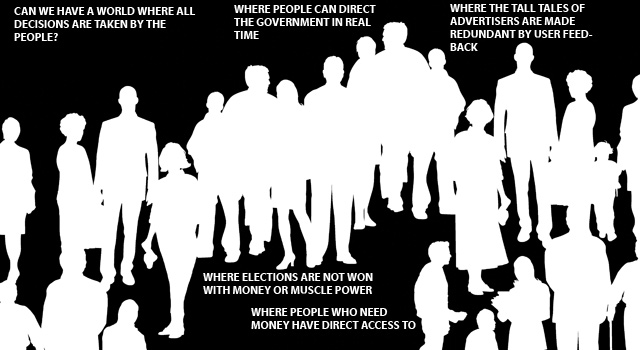 08 December, 2014
Print this article Font size -16+
Welcome the Netocracy. An Internet-enabled democracy. In its extreme meaning, as proposed by Swedish thinker Alexander Bard, Netocracy is a system where power actually rests with the people, how democracy intended it to be — all decisions of the state to be taken collectively by the people, everybody fully aware of the factors that impact the decisions they take and the implications because knowledge will be absolute thanks to the Internet. That of course, might be a far-fetched idea, but power is definitely moving to the people, aided by the Internet.
Look at the biggest gamechangers of the last 12 months. It was the Internet that allowed upstarts like Arvind Kejriwal or political pariahs like Narendra Modi to transcend the glass ceiling of traditional politics, reaching out to the people directly and showcasing themselves as change-agents. It is the Internet that helps an Indian to tap into the expertise of a foreign professor or a specialist doctor without the associated costs that made it prohibitive otherwise. Just as well, it gives the said professor or doctor the opportunity to reach out to a class of people they never would otherwise without sacrificing their income or comforts.
The Internet has truly, and irrevocably, transferred power to the hands of the people. And the world is adapting. As it changes to accommodate the new reality, the rules of the game will change too. Today, be it a restaurant, movie or a product, you trust a customer review more than, or at least, just as much as that of an expert. Businesses are taking notice. The Internet-armed generation doesn’t look the other way when confronted with the stark realities of life. They want to contribute in their own small ways. Enter crowdfunding.
The lure of anarchy is back. Bitcoins represent that. A world where governments no more have a say over monetary policy, and the value of money. Where the traditionally wealthy have to start on the same ground as everybody else. It is a flawed and impractical system in its purest form, but the idea is catchy. Just like the dictators around the world as well as indifferent democratically elected leaders have been booted out through protests. The replacements have had their faults (exhibit 1: Kejriwal’s fall from his stratospherical stardom), but that does not mean that the old order will be tolerated.
People are turning out to vote in ever-increasing numbers, and it is only a matter of time before their voice is heard more often. Corporate India is trying that out, with new rules for companies mandating e-voting on important decisions, and higher thresholds of approval for dubious transactions. Will the political landscape also accommodate a greater say for the people in strategic decisions? Is it a good thing? Is it practical in India?
In this special package, we look at Netocracy, exploring these themes. We have five views on how the world would change in their spheres. Happy reading. And thinking!
(This story was published in BW | Businessworld Issue Dated 15-12-2014)