Demand In Luxury Space Hots Up 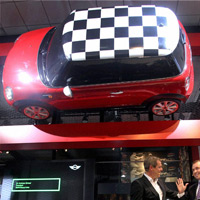 And the market leader in the luxury segment BMW launched the Mini brand in India with four models -- Mini Cooper, the Mini Cooper S, the Mini Convertible and the Mini Cooper S Countryman -- priced between 24.9 lakh and Rs 31.99 lakh. BMW will be importing these models as completely built unit. It has already started bookings for the brand in India and deliveries will start by March this year. Apart from this, the new BMW M5 was also launched today at a whopping price tag of Rs 95 lakhs. The company also previewed the BMW Vision ConnectedDrive Concept. The company will also launch the new BMW 3 series in July 2012.