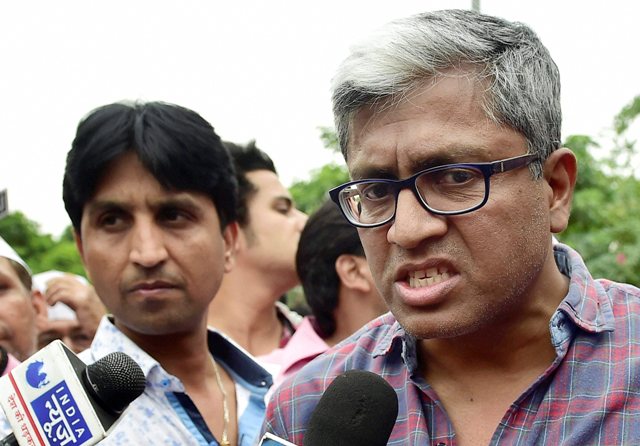 16 June, 2015
Print this article Font size -16+
A day after his arrest, AAP leader Jitender Singh Tomar was on Wednesday taken to Faizabad in Uttar Pradesh by Delhi Police for questioning in the fake degree case but he maintained that the allegations were false and accused the Centre of a "conspiracy".
Tomar, who quit as Delhi Law Minister after his arrest on Tuesday, claims to have done his BSc from RML Avadh University, Faizabad. Police are taking him there for an on the spot verification and questioning, sources said.
The AAP leader, who was taken to Lucknow by train around midnight en route to Faizabad, maintained that his degree was "genuine".
"My degree is absolutely genuine. It is a conspiracy by BJP and the central government. Yes, They are not letting AAP government work," he told reporters this morning at the railway station in Lucknow from where he was being taken to Faizabad by road.
"There is nothing wrong with my degree," Tomar, 49, asserted.
Tomar, MLA from Trinagar and a first-time minister, was remanded in four-day police custody by a Delhi court on Tuesday.
He was being escorted by an ACP level officer along with seven other personnel to Faizabad.
Delhi Police has claimed that a nearly month-long investigation found that Tomar not only submitted fake science graduation degree and law mark sheets to register with the Bar Council of Delhi but forged a migration certificate also.
Investigators said that an FIR was registered and Tomar was arrested only after finding concrete evidence of his wrongdoing following a complaint by Bar Council of Delhi Secretary Punit Mittal on May 11.
University Records
Once police received the complaint, a preliminary enquiry, as per the directives of the Supreme Court, was launched and two teams were sent to verify the documents attached with the complaint to RML Avadh University, Faizabad and Tilak Manjhi Bhagalpur University in Bihar, they said.
"In the record of KS Saket PG College, Ayodhya from where the alleged B.Sc degree and mark-sheets were issued in the name of Jitender Singh Tomar, no such student was found in the college admission register while roll numbers mentioned in the documents were not found in the university record," said Delhi Police spokesperson Rajan Bhagat.
When the police team contacted the Controller of Examination of RML Avadh University, he reported that no B.Sc degree and mark-sheets in the name of Jitender Singh Tomar have been issued by the University as per their record.
"We then checked the alleged provisional certificate of LLB issued by Tilak Manjhi Bhagalpur University. A report from the university has termed the degree fake. The roll number mentioned in the provisional certificate of LLB was found to be allotted to another student, Sanjay Kumar Chaudhary, from a different stream issued in 1999," Bhagat said.
The facsimile signatures of Rajender Prasad Singh as the Controller of Examination, on the marks sheet of LLB (Part III) and Provisional Degree were found to be forged, he added.
Interestingly, VNSL Studies, Munger, Law College, admission record, it has been shown that Tomar has obtained the B.Sc degree from RML Avadh University, whereas in the record of Tilak Manjhi Bhagalpur University, he has shown to have been migrated from Bundelkhand University.
'Paying Price For Opposing Modi'
Meanwhile, Aam Aadmi Party stepped up its attack on the Centre and vowed to continue its "fight".
AAP's Delhi Convenor Ashutosh said those who oppose the Narendra Modi government "have to pay the price".
"Those who oppose Modi govt have to pay the price. Tomorrow don't be surprised if AAP leaders are killed in road accidents. But we will fight," the AAP leader said in an early morning tweet.
The AAP government and the Centre have been at the loggerheads over several issues ever since the former came to power early this year.
(PTI)
Tags assigned to this article:
politics news 6 delhi delhi police aam aadmi party jitender singh tomar