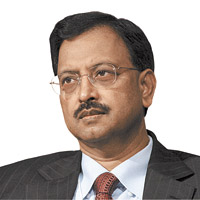 08 November, 2014
Print this article Font size -16+
Five and a half years after erstwhile Satyam Computer Services founder chairman B. Ramalinga Raju’s shenanigans came to light, he, along with four others from the top management, has been barred from the market for 14 years by the Securities and Exchange Board of India (SEBI). The capital markets regulator has also directed the five to return unlawful gains of Rs 1,849 crore within 45 days, with 12 per cent interest from 7 January 2009 to date. Raju, who is on bail after spending 32 months in jail, could again be arrested if he fails to meet the SEBI deadline.

Penalised, Again
Mukesh Ambani controlled Reliance Industries (RIL) has been slapped with an additional penalty of $579 million by the government for producing less than the targeted quantity of natural gas from the offshore KG-D6 block in Andhra Pradesh. The fresh penalty is in addition to the earlier fine of $1.80 billion slapped on the company for production shortfalls. The penalty has, however, failed to impress critics who allege proximity between PM Narendra Modi and the RIL head.

Google’s Search Ends
The man responsible for reviving Boeing’s commercial aircraft business and reshaping a moribund Ford into a competitive automaker is now on board Google. The search giant, working on developing self-driving cars, has inducted Alan Mulally into its board of directors to gain from his auto expertise in this quest. The 68-year-old, who was appointed on 9 July, will receive $1 million in Google stock, an annual equity award of $350,000 with a $75,000 cash retainer and reimbursement of expenses.

Stock Giveaway
Uber-billionaire Warren Buffett has made his biggest donation yet, $2.8 billion in securities to the Bill and Melinda Gates Foundation and four Buffett family foundations. He gave away 21.7 million shares of his company’s class B stock, valued at $128.98 a share, which reduced his holdings to $63.1 billion. Having pledged to give away 99 per cent of his fortune, over the past eight years Buffet has donated $18.7 billion.

Skype Breaks
Subrata Roy sure can’t break out of Tihar, but he can take a break now. The Securities and Exchange Board of India (SEBI) has allowed him to step out of jail for a few hours every day to negotiate the sale of his foreign properties over video conference to enable him to mop up the remaining sum required for his bail. Roy will only be granted bail on depositing Rs 5,000 crore in cash and an equal amount in bank guarantee.

Spot Reclaimed
Carlos Slim Helú is once again the world’s richest person, thanks to a sharp increase in the share price of his company América Móvil, a telecom giant, both in the US and the Mexican markets. Slim bumped Microsoft co-founder Bill Gates from the top spot in the Forbes world’s billionaire list, a position Gates held since May 2013 after displacing Slim.

Still The Boss
Sameer Gehlaut, co-founder and chairman of Indiabulls Group, which is currently undergoing a major overhaul, will continue to control, manage and supervise most of Indiabulls’s major businesses like housing finance, real estate, securities and wholesale trading. Rajiv Rattan and Saurabh Mittal, the other co-founders of the group, will relinquish all control over the firms in Gehlaut’s favour. Gehlaut also has complete rights to the Indiabulls brand.

Son Rise
Sharvil P. Patel has been appointed chairman of Zydus Wellness, a personal care products firm, after father, Pankaj R. Patel, expressed his unwillingness to be reappoinment director of the company. The move is being viewed as a passing of the baton to the next generation in the Zydus Cadila Group. Sharvil has been a non-executive director at Zydus Wellness since 2009.