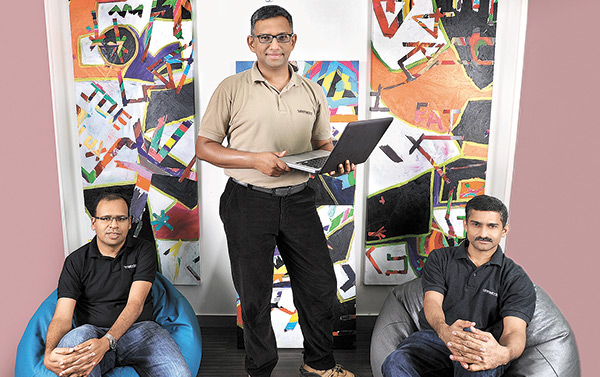 08 November, 2014
Print this article Font size -16+
From Future Group’s Kishore Biyani to Shoppers Stop’s Govind Shirkande, everyone places great emphasis on social media marketing. While the Future Group has a ‘Priya’ answering customer queries on Facebook, Shoppers Stop has more than three million ‘likes’. But most companies don’t know how they stand head to head in terms of social media marketing campaigns. They also don’t know what to make of the ‘likes’. Investments are mostly based on ‘gut feelings’; and big teams trawl the Web to figure out how a brand is faring — a cumbersome process.
Unmetric, born in 2010, offers a solution. The social media benchmarking platform attempts to remove confusion over social media for companies, and make their investments more meaningful. In a way, it helps companies understand how their promotions can be connected to the ‘likes’, especially compared to competitors who have a similar following. It also helps them understand what people are saying about them on social media. “Unmetric uses the public application programming interfaces (API) provided by the various social networking websites to gather the primary data on what brands are up to,” says Lakshmanan Narayan, CEO of the Chennai-based company, which he co-founded along with Kumar Krishnasami and Joseph Varghese. To find needles in the haystack, he says the company uses a blend of machine learning and human computing. “This helps our clients uncover competitors’ strategies and improve their own efforts.”
For example, the founders noticed early on that many brands were using Twitter as an official customer support channel. So, their platform extrudes ‘call centre-style’ metrics to analyse the average reply times and see which brands respond the fastest.
Unmetric has some big names as clients — Toyota, Chevrolet, Cadillac, Subway, Cisco, Airtel, Aircel and Café Coffee Day. It also works with agencies such as Saatchi & Saatchi, GroupM, GolinHarris and FleishmanHillard on social media accounts of many Fortune 100 names. It has grown to 45 employees in a little over a year, and now has offices in New York and Coimbatore as well.
The founders met at IIT Chennai in 1989. After graduating, while Krishnasami went to the US for higher studies, Narayan and Varghese became classmates at IIM Calcutta. Krishnasami and Varghese went into technology. Narayan chose marketing but went back to developing a marketing software for a tech firm. It was in 2009 that he approached his friends about becoming entrepreneurs.
Narayan felt there was a need for products to address the needs of small businesses. The first attempt was a solution to help restaurants in New York understand how the competition was using social media to connect with customers.
“There was merit in what he was telling us. Social media was big, but no platform offered intelligence. This was a great opportunity. Little did we know that the product that we built for small businesses would morph into a platform sought by large companies,” says Krishnasami, head of products and in charge of West Coast operations in the US.
Unmetric’s platform is more than just a meaningful dashboard for a chief marketing officer. Just saying X fans and growth of Y mindshare does not translate into insight. “Everything about Unmetric is designed to help brands find out if they are social enough,” says Varghese, head of technology. He says that their entire focus is on the social media habits and performance of the biggest brands. “Beyond analytics, Unmetric can be thought of as a decision-support system for heads of digital media or CMOs.” Unmetric has one patent pending for its algorithm that enables self-learning by machines.
When the company started out in 2011, it received $3 million from Nexus Venture Partners to scale up its product and the US team. “They are solving the noisy data problem in social media. Their artificial intelligence algorithms made us back them,” says Jishnu Bhattacharjee, managing director of the fund.
Subway, the billion-dollar sandwich company, was their first client. Karie Ford, vice-president of media at Subway, says it is not just about fan count. “Unmetric understands this and lets us know how we stack up against our competitors.”
“It’s about response time, response rate, fan engagement, channel sentiment and many other metrics,” says Joe Colacurcio, research manager at Zocalo Group, which works with global automotive brands on social media campaigns. With Unmetric’s platform, Zocalo Group has quantified social performance, which let it understand what its brands’ followers were looking for.
Unmetric’s business model is based on annual maintenance contracts and licensing fees, though revenue share based on campaigns’ success is a part of its future plans. There are other companies in the same space as Unmetric. But for the three friends, the target is a billion-dollar valuation. Like their competition, they are trying to get there first.