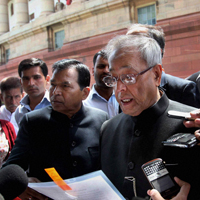 08 November, 2014
Print this article Font size -16+
India and Mauritius are working to find solutions to their differences on Double Taxation Avoidance Agreement (DTAA) and the issue could be resolved by April when the two sides meet in New Delhi.

"We spoke about the Double Taxation Avoidance Agreement. We have already found some common ground to find a solution. This is going to come to an end in April," he said in the presence of President Mukherjee after attending a ceremony where several pacts on health, medicine, tourism were signed.

The India-Mauritius Joint Working Group met in December, 2011, and again in August, 2012, to discuss concerns on the operation of the India-Mauritius Double Taxation Avoidance Convention.     Mauritius had also agreed with India on a Tax Information Exchange Agreement (TIEA), which incorporates provisions on assistance in the collection of taxes.

Mukherjee said India looks forward for the meeting of the Joint Working Group to be held in April in New Delhi.

"I am pleased to note that the Joint Working Group on the Double Taxation Avoidance Convention (DTAC) has met twice in the last one year. They have provided an opportunity for both sides to discuss all issues with the aim of finding a mutually acceptable and beneficial outcome," Mukherjee said.

"India looks forward to holding the next meeting of the JWG soon in New Delhi. We also look forward to the holding of the 11th India-Mauritius Joint Commission meeting," he said.

"I am very happy to note that MoUs in health and medicine, tourism and cooperation as well as in the field of senior citizens and persons with disabilities have been signed today. I am positive that these agreements will further enhance the quality of our partnership and be of benefit to the people of India and Mauritius," Mukherjee said.

The President said India will continue to extend assistance to Mauritius in the field of human resource development and capacity building and has already increased the training slots for Mauritius under the Indian Technical and Economic Cooperation programme to 170 for civilian programmes and 100 for defence-related programmes.

These slots can be increased to meet further demands.

"It is heartening to note the rise in the number of Mauritian students availing of the 100 educational scholarships offered by the Government of India annually," he said.

Mukherjee also thanked the Mauritius Government for its valuable support on global issues of vital importance to India.

Mauritius has been steadfast in its condemnation of international terrorism.

Mukherjee said his discussions today with Prime Minister Ramgoolam, have established a firm road map for the consolidation and enhancement of mutually beneficial bilateral relations.

"Ours is a strategic partnership which has the well-being of our peoples at its core," he said.