Death Of A Dream? 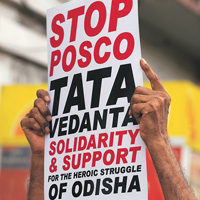 Many senior managers at private firms in Orissa say that earning a six-figure salary in their home state (Orissa) was something they had never dreamt of until chief minister Naveen Patnaik started wooing investors to the state, which seemingly had it all — minerals (iron ore, manganese, bauxite), rivers and a coastline.

The Orissa Industries (Facilitation) Act was enacted in 2004 to provide a single-window clearance system for important investments. Mega projects, including the country's biggest foreign direct investment (Posco's $12-billion steel plant) in 2005, were announced with great fanfare, while others came in more quietly. As of June 2010, the single-window system cleared 153 projects approved over the past four years.

It has not helped that Orissa's mega projects have become the flagship arguments for the environment ministry's (MoEF) point of view in the Central government's larger debate on sustainable development. With MoEF's cancellation of bauxite mining for Vedanta and Posco's steel project, a big portion of planned investments has come under a shadow. Some estimates show that of the more than Rs 6,50,000 crore of proposed investments across sectors in Orissa, at least Rs 1,40,000 crore of investments may not see the light of day.

Jindal Steel and Power's 6 mtpa (million tonne per annum) integrated steel and 1,000- MW captive power plant is the latest to have tripped under MoEF's scrutiny. The ministry has sent a show-cause notice to the company for starting construction before acquiring forest clearance.

ArcelorMittal is also shifting focus to states such as Karnataka where land acquisition for its 6-mtpa steel plant is already underway — compare that to the company's four-year long wait in Orissa to secure land for a 12-mtpa steel plant. A few weeks ago, some ArcelorMittal employees, including a doctor, were held hostage in Orissa for a few hours by disgruntled land owners.

Land acquisition was an issue even when the Tata Group set out on its plans to build a steel plant in Gopalpur nearly 15 years ago. Tata's steel plant in Kalinganagar also saw clashes with locals despite the fact that the land was already marked as an industrial area. Tatas have made considerable progress there, though all villagers are yet to be relocated. Interestingly, progress has been quicker in smaller projects where government facilitation was not sought.

Meanwhile, the state is turning the heat on companies, particularly independent power producers (IPPs) that are slow with their approved projects. Of the MoUs for 27 IPPs, not many have made progress. Ironically, it is Sterlite (Vedanta's subsidiary) that has become the first private sector power project to commission 600 MW of its promised 2,400 MW in Orissa.

Vedanta is currently shipping bauxite from Gujarat to its alumina refinery in Orissa at an additional cost of Rs 1,900 a tonne. Tata, too, looks committed to turning its 3,800-acre land in Gopalpur into a special economic zone.  Orissa after all claims to own 60 per cent of the country's bauxite and 26 per cent of its iron ore.

The state can take some comfort from the  Reserve Bank of India's August bulletin. According to the report, spatial pattern of projects proposed during 2009-10 rank Orissa as the most favoured state with a 13.4 per cent share of total investment — ahead of Maharashtra, Andhra Pradesh and Chhattisgarh. But when it comes to seeing the promises being translated into real projects, Orissa falls behind many states such as Gujarat, Maharashtra and Andhra Pradesh.